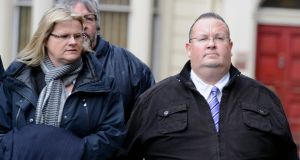 Philip Smith was paid €635,000 annually as chief executive of the country’s largest insurer. He told the tribunal that since leaving RSA, he had earned just €25,000 in consultancy fees. Photograph: The Irish Times

The Employment Appeals Tribunal was set up under legislation dating from 1967, initially to deal with redundancy payments. It has evolved in the decades since to cover a wide range of employment rights, from unfair dismissals to the payment of wages to parental leave.

While open to all employees in the State, it was really designed to provide an informal and inexpensive way for workers to obtain redress for infringements of certain employment rights.

To assist the shopfloor David to take on the corporate Goliath, if you like.

Highly paid executives who found themselves in conflict with their employers usually trotted off to the High Court to seek redress.

Not any more. Since the economic crash in late 2008, an increasing number of senior executives have sought to fight their cases in front of the tribunal rather than in the High Court.

More recently, Seán Quinn jnr was awarded €95,000 by the tribunal last month for unfair dismissal from his position as head of claims at Quinn Insurance, a company that was owned by his family before being placed into administration by the Central Bank in 2010.

But by far the most high-profile case is that of Philip Smith, whose unfair dismissal claim against RSA yielded him an eye-popping award of €1.25 million from the tribunal on Monday.

There’s no official ranking of tribunal awards but employment lawyers believe this to be comfortably the highest ever made by the EAT. It represented two years’ earnings for Smith, the maximum allowed by the tribunal.

Smith told the tribunal that since leaving RSA, he had earned just €25,000 gross in consultancy fees and was relying on the support of family and friends. He claimed RSA had obstructed his attempts to secure consultancy work, an allegation the insurer denied.

Its chairwoman, Niamh O’Carroll Kelly, said his suspension on November 8th, 2013 on national television was like taking a “sledgehammer” to his reputation and to his “prospects of ever securing employment in this industry again in Ireland, in Europe and very possibly beyond”.

Smith’s case was also unique in that it took seven days to hear, including five of evidence. O’Carroll Kelly made clear to both sides from the outset that cases were normally heard over one or two days.

For Smith, a benefit of using the EAT was that each side pays its own costs, unlike in the Four Courts. RSA is rumoured to have run up a legal bill of about €300,000 in pleading its case before the tribunal, where it was represented by Brian O’Moore SC and law firm A&L Goodbody.

Ironically, Smith’s case might yet be heard in the courts. RSA has six weeks to appeal the determination to the Circuit Court, where the case could be heard again in full. It could then be appealed to the High Court and from there, ultimately, to the Supreme Court, albeit on a specific point of law.

RSA indicated on Monday that it intended to appeal. “We are extremely disappointed by the tribunal’s decision and fundamentally disagree with it. We are considering our options but intend to appeal the judgment,” the company said.

The evidence was illuminating in many ways. Sadly, this will be one of the final cases open to such public scrutiny. Under new legislation, such cases will be held behind closed doors and the findings will not be published, unless the case ends up in the Labour Court.

This would appear to fly in the face of this Government’s commitment to openness and transparency, with, for example, certain family law cases, a military court martial and disciplinary cases involving accountants now open to media reporting, and the Freedom of Information Act extended significantly.

It will only serve to suit employers who prefer not to have their dirty laundry washed in public. It’s not good enough. Twitter: @CiaranHancock1