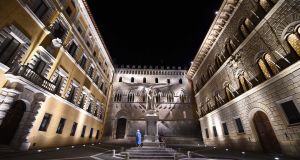 Monte dei Paschi is the weakest link among big lenders in the euro zone’s fourth-largest bank sector and may have to raise capital quickly to meet the ECB’s target, given that last month’s Brexit vote has hurt investor appetite for bad debts.

The Italian government wants a green light from the European Union to help lenders raise capital without triggering bail-in rules that would force bondholders and shareholders to share some of the losses.