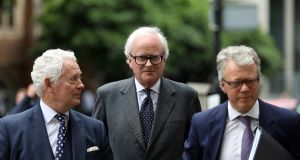 Four former Barclays executives including its ex-chief executive John Varley appeared in the dock yesterday to face criminal charges emanating from the bank’s efforts to avoid a taxpayer rescue in the financial crisis.

Mr Varley, who was chief executive at the time of the financial crisis and three ex-colleagues including Roger Jenkins, the former head of the bank’s Middle East operations, faced allegations at Westminster magistrates’ court relating to Barclays’ capital raising at the height of the crisis in 2008.

However, she stipulated that both Tom Kalaris, who is a dual US and British citizen and has property in both countries, and Roger Jenkins who is British but lives in Malibu, California, must post £500,000 security for bail within seven days. Mr Kalaris (61) was head of Barclays’ wealth management division in 2008.

Lawyers for Mr Jenkins, also 61, and Mr Boath said last week that the two men would “vigorously defend” themselves against the charges. Mr Varley and Mr Kalaris are also expected to plead not guilty, according to lawyers.

Mr Varley is the first global bank chief executive to face criminal charges stemming from the financial crisis and this was the first court appearance for the four men since the UK Serious Fraud Office brought charges last month.

Mr Varley stood alongside his former colleagues and spoke only to confirm his full name, date of birth and his address in west London.

His three co-defendants all did the same despite one defence lawyer William Boyce QC objecting to his client, Mr Boath, giving his home address in Henley-on-Thames.

Ms Arbuthnot told him that it was “absolutely clear” that all defendants had to do this.

The first charge was also read out to the men before Ms Arbuthnot transferred the case to Southwark Crown Court for a hearing on July 17th.

The four defendants chatted to each other inside the court before the case began. They were then led into the dock for the start of the 40-minute hearing where they sat staring straight ahead. The courtroom and public gallery was packed with journalists and lawyers.

Edward Brown QC, the prosecutor acting for the SFO, set out a summary of the charges facing the individuals and the bank relating to the 2008 capital raising.

He argued that the four men should have bail conditions imposed given they were facing “serious criminal charges” and suggested travel restrictions including notifying the SFO within 24 hours of change of residence.

The bank was represented in court by Richard Lissack QC. The Barclays prosecution is one of the most high-profile cases to be brought by the SFO.

Mr Varley and Mr Jenkins face two counts of conspiracy to commit fraud by false representation over two emergency cash calls when Qatar invested £6.3 billion to keep the bank out of UK government control. The bank entered an “advisory services agreement” with Qatar worth £322 million at the same time.

The two men are also charged with a count of unlawful financial assistance over a $3 billion loan the bank made to Qatar’s finance and economy ministry just as the second cash call was closing. Barclays Plc also faces the same three charges.

Mr Kalaris and Mr Boath, who chaired the bank’s financial-services team, face a single count of false representation over the first fundraising.