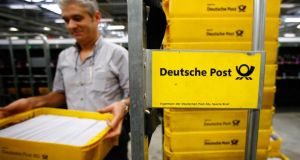 Germany was accused of “flogging the family silver” by state auditors for selling off future pension income through a Dublin-based special purpose vehicle – and saving tax in the process.

In a series of scathing annual reports, Germany’s federal court of auditors likened the move to sleight-of-hand accounting that breached the spirit of Germany’s postwar constitution.

The criticism from the Bundesrechnungshof centres around the sale to private investors, or securitisation, in 2005 of €8 billion in future pension income from the privatised post office, Deutsche Post.

As part of a decade-old privatisation agreement, Germany agreed to meet the majority of pension obligations of former civil servants working for the previously state-run post office – estimated to total up to € 550 billion by 2090. Approximately € 20 billion in pension payments was to be provided by Deutsche Post’s new owners.

The securitisation deal, managed by two special purpose vehicles set up in Dublin, German Postal Pensions Securisation 1 and 2, saw Berlin sell off some €8 billion of this future cash-flow. The income allowed Berlin reduce its budgetary contributions to the post office pension fund from 2005 to 2007.

Since 2008, with the end of one-off payments, Berlin now has to shoulder the bill for 275,000 Deutsche Post pensioners. Back in 2004, Germany’s highest budgetary watchdog attacked the Deutsche Post pension deal for, in its view, selling off state assets to plug holes in its budget.

“If we now give away this family silver to finance the current budget, we are pushing the burden onto our children, something that’s not on,” said Dieter Engels, president of the federal court of auditors, of the planned deal in 2004.

According to Dublin-based securitisation experts, structuring the deal in Ireland through the section 110 regime, as opposed to Germany, ensured that there was no tax leakage from the transaction. This meant that it did not give rise to any costs to investors.

At the time of the transaction, the deal was heralded in the media for both its scale – an €8 billion deal is deemed to be a rare enough commodity – and the fact that it came with a guarantee, albeit not an explicit one in order to comply with Eurostat rules, from the Federal Republic of Germany.

Pre-crisis, sovereign securitisation deals had been growing in popularity as countries looked to show their budget deficits in a better light.