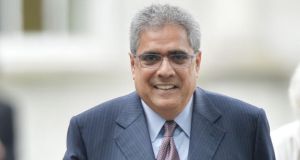 Mr Chopra told the Dáil’s banking inquiry Ireland could have saved up to €8 billion if the European Central Bank had allowed the government to force a 50 per cent haircut on unguaranteed, unsecured bondholders. He also said the European institution and its then-president Jean-Claude Trichet went beyond its mandate when it delivered former minister for finance Brian Lenihan with an “ultimatum” in letters sent in October 2010.

Mr Chopra said he had not seen the correspondence, which warned the country should accept a bailout or lose ECB funding, until November 2014. In response to a question from Fine Gael TD John Paul Phelan, he said: “In my view, ultimatums are not the right way to conduct business amongst euro area members and institutions, and we’ve seen that such ultimatums were delivered in the case of Ireland, through the letters that you’ve mentioned, and also we’ve seen them recently in the case of Greece.

The letters were sent in October 2010 by Mr Trichet to Mr Lenihan but were not released publicly until late last year.

Mr Chopra said the ECB had only offered support to Ireland “grudgingly” and its position that countries must stand behind their own banks made the crisis worse. He said it was the belief of the IMF that losses imposed on junior bondholders were not sufficient and that the burning of senior bondholders should have been explored.

“European institutions put an enormous weight on the issue of contagion and they were very concerned that moving on imposing losses on senior bondholders in Ireland would adversely affect euro area banks and their funding markets,” he said.

“The view of the IMF staff was, this does need to be taken into account but that this was something that was anticipated by markets and if it was done within the context of a programme where the sovereign has already lost access to markets, it is something that the markets should have been able to absorb. And even if they were not able to absorb it, there were mechanisms to help address that contagion.”

He told the inquiry the Irish taxpayer paid a higher price and the country has higher public debt because burden-sharing was avoided. Mr Chopra said the European Commission and the ECB often put euro-area concerns ahead of those of member countries.

Asked by Fianna Fáil TD Michael McGrath if the ECB would have accepted a programme that included burning bondholders, Mr Chopra said: “No.”

Mr Chopra was the head of the IMF team that arrived in Ireland in 2010 when the country entered an €85 billion bailout programme. He said the IMF became a junior partner in the programme discussions and had to fight hard to become influential in the discussions.

The former official said the four-year plan agreed and introduced by the Fianna Fáil-Green Party coalition included more fiscal front-loading than he would have liked. However, he said much of the blame lay with the European authorities, who were concerned with targets set out in the Stability and Growth Pact. While the crisis was caused by a combination of international and domestic issues, it was mostly a homegrown one, he said.

“This ranked very high as one of the most expensive crises. There is no avoiding that. This was enormous.”

He said it was his belief the Irish taxpayer had borne a disproportionate amount of the crisis, which he says was caused by the inequitable decision not to impose losses on bondholders.

Mr Chopra, who has now left the IMF, said Ireland had outperformed itself but there were still a number of risks, the most serious of which is the rise in property prices.

1 Admission of mistake in Oxford vaccine dose raises doubts over reliability
2 Move to EU or face disruption, City of London is warned
3 Cliff Taylor: Deal or no deal we are now heading for a hard Brexit
4 Last orders for Rí-Rá and Globe as Central Hotel gets green light to expand
5 Karlin Lillington: How I managed to cut my mobile phone bill by at least half
6 Fiona Reddan: Who’s afraid of Revolut? Not AIB and BOI it seems
7 An Post parcel volumes to hit weekly record of 3.3m
8 Lahinch Golf Club runs out of its own cash after €3m Covid-19 hit
9 German watchdog reports EY to prosecutors over Wirecard audit
10 Irish Life fund pays €49m for 94 Dalkey apartments
Real news has value SUBSCRIBE