Cuts reflect impact of $8.9bn fine for US sanction violations 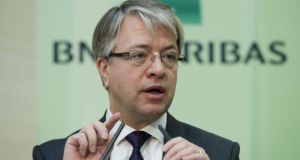 BNP Paribas has slashed the bonuses for its top executives to reflect the impact of last year’s $8.9 billion (€7.8 billion) fine for US sanction violations that almost wiped out its annual profit.

The move, announced after the market closed yesterday, is the latest sign of how the run-in with US regulators continues to reverberate at France’s biggest bank by assets. BNP has already suffered the departure of several senior bankers and had its ability to clear US dollar transactions curtailed as a result of the fine.

Jean-Laurent Bonnafé, chief executive, had his annual bonus cut by about a third to €1.2 million. He also had a long-term share scheme worth €883,565 cancelled and his potential award for a future five-year incentive scheme cut by 70 per cent. In total he has suffered a €1.87 million pay cut, but still took home €2.4 million.

Baudouin Prot, his predecessor as chief executive who stepped down as chairman last year, had all his variable pay cancelled, meaning he received only his pro rata salary of €779,167 for the year to November. – (Copyright The Financial Times Limited 2015)