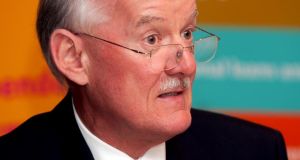 Patrick Neary: He may not have covered himself in glory, but it is far from certain that anybody else sitting in his chair would have cried stop. Photograph: David Sleator.

In many ways the Anglo trial could not have gone better for Seán FitzPatrick. Not only was he found not guilty, he has been replaced as public enemy number one by Patrick Neary.

The former regulator – who did himself no favours in the witness box – has been accused by the trial judge of leading FitzPatrick’s co-accused Pat Whelan and Willie McAteer into “error and illegality” in his handling of the whole affair. Such was the significance of this, the judge felt he could not give a custodial sentence to the two men.

The ensuing witch hunt against Neary has reached Salem-like proportions and calls have been made for him to be charged with various crimes and have his substantial pension docked.

It is hard to defend Neary given his performance during the trial, in particular his repeated inability to recall key events. But at the same time it would be a mistake to leave unchallenged the notion that it was up to Neary to decide whether or not the transaction being proposed by Anglo was legal.

To do so would be to fail to understand just how bad the regulatory regime that existed in 2007 actually was.

Neary may not have covered himself in glory, but it is far from certain that anybody else sitting in his chair would have cried stop. With hindsight, the regulatory regime that was in place in Ireland in 2007 was almost comically inept. It was was founded on the now discredited concept of “principles- based” regulation.

The role of the regulator in such a regime was not to ensure banks complied with regulations, but to set out some basic principles that banks should follow as they go about their business.

Handsomely rewarded
It was not the job of the regulator – much as we might wish it had been – to review this advice or challenge it. On this basis Neary did the job he was asked to do and was so very handsomely rewarded for. And before sending him to the gallows, it behoves us to ask whether any other career department of finance official parachuted into the role of regulator would have made a better fist of it. Probably not is the answer.

If the baying mob must have a victim, perhaps the correct place to look for one is among those responsible for the regime in which Neary worked.

The immediate parents of principles-based regulation in Ireland were Charlie McCreevy and Mary Harney. They were respectively the minister for finance and the minister for enterprise when the Irish Financial Services Regulatory Authority came into being in 2003.

The decision to create a new regulator had its origins in a report by a group chaired by Michael McDowell, who was taking one his periodic breaks from politics at the time.

All three would have been very much of the “markets know best” school of thought when it came to economics and about as close as Ireland ever came to having political evangelists for free markets and unfettered capitalism.

It is not surprising then that they should embrace principles-based regulation with such gusto. It promised a smaller and cheaper regulator and, in theory, would leave the banks to get on with creating wealth and and all of that.In many ways the regulator’s job under this vision was not to get in the way of the people who really knew how to get things done – the bankers.

Whatever about his personal failings and behaviour in court, Neary is not uniquely culpable for what was a catastrophic failure of a regulatory regime that was unfit for purpose. The blame starts with those who put the regime in place.

They, however, seem to be enjoying far more comfortable retirements than Neary and nobody seems to want to take away their pensions or drag them in front of banking inquiry.