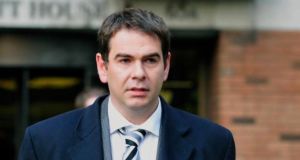 The birth today of a baby boy to Sean Quinn Junior and his wife led to a short delay on Wednesday in the Quinn family deciding whether to bring an appeal which could delay the scheduled opening next month of their action aimed at avoiding liability for €2.34bn loans.

The birth of the child, the second boy born to the couple, was disclosed at a hearing this afternoon to make final directions for the hearing of the case by Mrs Patricia Quinn and her five adult children, listed to open on June 3rd.

The court had adjourned briefly to allow the sides take instructions relating to a possible appeal by the Quinns against Mr Justice Robert Haughton’s decision last week refusing to allow them claim they were innocent parties to the disputed transactions.

When the court resumed about 3.30pm, the judge was told by Bernard Dunleavy SC, for the Quinns, a “most unusual situation” had arisen, Sean Junior’s wife Karen had just given birth to a child, Mr Quinn was in the labour ward and lawyers were unable to get instructions from him. The judge granted counsel’s request to adjourn the matter toThursday.

The judge was dealing with final directions for the hearing of the family’s case, expected to last more than six months.

Initiated in May 2011, the legal costs of the case are already estimated at several million Euro with the final bill expected to be multiples of that.

The case is against Irish Bank Resolution Corporation and its special liquidator Kieran Wallace.   The Quinns dispute the validity of share pledges and guarantees provided as security for loans made by the former Anglo Irish Bank to Quinn companies. Those loans, the Quinns claim, were made for the unlawful purpose of propping up the bank’s plummeting share price.

The defendants previously joined Sean Quinn senior and two former senior executives of the Quinn group, Liam McCaffrey and Dara O’Reilly, as third parties. The bank claims the third parties at all times acted as agents of the Quinns concerning the execution of share pledges and guarantees. The Quinns deny those claims.

Last week, the judge refused to permit the Quinns amend their claim to include a claim they were “innocent parties” to the disputed transactions. That amendment was sought after the Supreme Court ruled last March that loans, even if made for unlawful purposes, remain enforceable.

On Wednesday, Paul Gallagher SC, for IBRC, said it wanted to have certain sections of the Quinns’ claim and parts of some witness statements deleted in light of the Supreme Court ruling.

Mr Dunleavy SC, for the Quinns,  opposed that application but indicated the Quinns may not appeal the court’s ruling refusing permission to amend their claim if the bank did not pursue its application to have certain evidence declared inadmissible at this stage. That matter, due to the birth of the baby boy, was adjourned to allow both sides get full instructions on how to proceed.

The full hearing of the family’s case is scheduled to open on June 3rd with a week long opening statement on behalf of the family, followed by a short outline by the bank of its defence and, if they wish to do so, an outline of the position of the third parties.