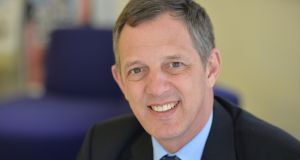 Net profits at KBC Bank Ireland fell by a third during the first half of 2018 compared with the same period last year, the company’s interim results showed on Thursday.

It said the year-on-year decrease was primarily due to “reduced impairment provision releases”.

KBC Bank Ireland chief executive Wim Verbraeken told The Irish Times the release of provisions was unrelated to costs incurred in the tracker mortgage scandal. “The two items are completely separate,” he said.

“[The drop in profit] is essentially down to differences in the release of provisions of past charges for credit losses,” he said. “I wouldn’t say it’s outside our control but it’s obviously driven by a number of factors: the evolution of legacy portfolios; the house price index evolution, etc.”

KBC said its operating profit for the period amounted to €51.6 million before tax and impairment.

The portfolio was sold to entities established and financed by Goldman Sachs: Beltany Property Finance, Tramore Funding and Banna Funding.

As a result of the transaction, the level of bad loans at KBC Bank Ireland will fall by approximately 40 per cent, resulting in its non-performing-loans ratio reducing by roughly 11 percent to around 25 per cent.

KBC Group chief executive Johan Thijs said KBC Bank Ireland “has been building down organically its legacy portfolio of non-performing loans in Ireland over the past few years”.

“However, over the last months, there has been a growing interest from the international financial markets for non-performing loan exposures,” he said. “This is a clear market trend.

“KBC wishes to accelerate the reduction of non-performing loans by acting upon the increased interest presented in the market.”

An analyst with Davy said the sale of the €1.9bn portfolio “largely overshadows” the bank’s results.

Mr Verbraeken said he disagreed with the assessment. “The transaction is expected to result in a net profit and loss impact of €14 million, so there is a slight positive outcome,” he said. “ I would not agree that the sale overshadows our results.”

Other financial highlights for the bank include a reduction in its impaired loans stock of 7 per cent to €4.4 billion.

Mortgage cases in arrears were down 7 per cent, with nine out of 10 customers in difficulty offered “a range of solutions”.

KBC has also completed its redress and compensation payments to all impacted customers in the tracker mortgage scandal. The total number of mortgage accounts identified as impacted was 2,754.

“These financial results underpin the sustainable growth story of our Irish business with over 40,000 new customer accounts opened in the first half of the year alone and new mortgage production ahead of last year’s level,” he said.

KBC Group ended the second quarter of 2018 with a net profit of €692 million. Combined with the €556 million reported in the first quarter, this brings KBC Group’s net result for the first six months of 2018 to €1.2 billion.

An analyst with Goodbody said KBC was “already well on the way to delivering, or exceeding its impairment writeback target, with large write-backs also a key feature of results at AIB and BOI in recent weeks”.

“The loan book sale at net book value shows good interest for Irish asset, highlighted in recent sales by AIB and PTSB, though its estimated provision coverage at almost 80 per cent undoubtedly helped,” he said.