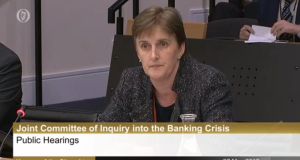 Mary Burke, head of banking supervision in the Central Bank from 2006-2008, appearing at the Banking Inquiry on May 27th, 2015. Photograph: Oireachtas TV

Mary Burke, who was head of banking supervision in the Central Bank from 2006-2008, admitted the level of banking regulation during the period was not appropriate.

She said: “Given the scale of changes to the regulatory framework at international, EU and domestic level, it is only reasonable to accept, albeit with the benefit of hindsight, that the pre-existing regulatory regime, both domestically and internationally, was not fully appropriate, in terms of the areas covered, the detail prescribed and the regulatory tools available, including those for crisis management and resolution.”

But she added that a revision of the regulation would not have been a “panacea”.

Ms Burke said she “takes issue with aspects of the fine detail of the respective Honohan and Nyberg reports”.

But she added: “I accept generally the thrust of the findings contained in them”.

She said a four-person team - only three of whom were full-time employees - were responsible for eight credit institutions including Irish Nationwide Building Society and EBS.

She added: “It is difficult to convey the scale of pressures [that] management and staff in BSD (banking supervisory division) were working under, particularly from autumn 2007 onwards.

“It was not a question of somehow multitasking - it was an unrelenting onslaught of demands with staff working long hours which ultimately became unreasonable and unsustainable.”

Ms Burke said she first became concerned about liquidity in the banks in late 2007.

She said from April 2008 she “started to to feel it was more urgent”.

“Market conditions were more erratic. I wasn’t conscious that we were going to run out of liquidity. It was more worry about one individual bank,” she said.

Ms Burke said they were focused on liquidity, and does not recall any conversations about solvency. She said meetings were “chaotic”, but they did not foresee or had no indications of systemic risks.

Ms Burke said they got three extra staff in 2007 and asked for more in 2008, but were refused.

She did “self-censor” when she asked for more resources because she knew what the reaction would be.

Ms Burke said for two banks in particular the situation was “very serious”, and others were less serious. It was clear, she said, “that there would be contagion and it could spread”.