Banking inquiry talking to DPP about compelling some directors to appear 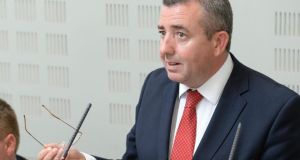 Banking inquiry chairman Ciarán Lynch: would not put a cost on the increased security around the 30,000-plus documents that it has received from various banks and institutions in recent months Photograph: Dara Mac Dónaill/The Irish Times

The Oireachtas Banking Inquiry is in discussions with the Director of Public Prosecutions about the possibility of compelling certain former directors of Anglo Irish Bank and Irish Nationwide Building Society to appear before the committee as it moves into the so-called Nexus phase of its work.

It is understood that the inquiry wants to call a number of the key figures at Anglo and INBS before the crash but has to be careful not to cut across legal proceedings being pursued by the DPP in relation to the extraordinary events that led to the institutions being bailed out by the State to the tune of €35 billion.

Questions have been raised about the committee’s ability to investigate certain matters relating to Anglo and INBS that are subject to legal cases involving the DPP.

The committee is conscious that any legal challenge to its work could stymie its examination of the financial crisis and is determined that the inquiry will not be brought down.

It is understood the committee has left slots free in the second half of July to accommodate the possible appearance of former Anglo or INBS executives. Given that notifications have to be sent out eight weeks in advance of an appearance, this means the inquiry will have to compel former Anglo and INBS executives to appear by mid May.

The committee is preparing to sit each Wednesday and Thursday from late April to the end of July, holding four hearings a week. It will break for August before returning in September to conclude its hearings. A report will be finalised by November.

The inquiry said yesterday it had stepped up security around the 30,000-plus documents that it had received from various banks and institutions in recent months. Committee chairman Ciarán Lynch declined to put a cost on the increased security. He said it was within the overall agreed budget for the inquiry’s work, which has been reported at about €5 million.

1 How can I view my dead brother’s will if I’m not the executor?
2 Analyst doubles projection for Tesla shares to $1,200
3 Kerry’s Chinese sales set for 30% hit from coronavirus
4 Investors pile into property as turnover in build-to-rent sector reaches €2.54bn
5 Provisional liquidator appointed to Dublin engineering firm
6 Bursting of Tesla bubble a case of ‘not if, but when’
7 Bank of Ireland staff in line for 2.95% pay increase
8 US reiterates opposition to Huawei equipment being used for Irish 5G
9 Must you pay a price for ethical investment?
10 Finance Ireland plans stock market flotation in May
Real news has value SUBSCRIBE