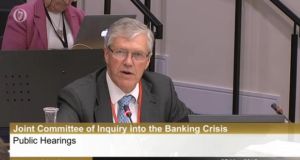 Tony Grimes, former Director General at the Central Bank, said in the two weeks running up to mid-September 2008 corporate deposits were being withdrawn.

Sean Quinn’s exposure to Anglo Irish Bank could have threatened the stability of the financial sector, the banking inquiry has heard.

Tony Grimes, former deputy governor at the Central Bank, said a meeting between the Central Bank and the Department of Finance in July 2008 discussed Mr Quinn’s level of debt.

Asked by Fianna Fáil’s Michael McGrath was the situation appropriate, Mr Grimes said he found the funding of his margin calls “highly unusual”.

The Central Bank said it had concerns at that time but did not take any action because it was a regulatory issue.

Mr Grimes also said that the banking system would have imploded if the losses at Irish banks were allowed to continue.

He said that in the two weeks running up to mid-September 2008 corporate deposits were being withdrawn.

Mr Grimes said: “The losses by Anglo were particularly severe over the two-week period. Losses on this scale were regarded as unsustainable.”

Mr Grimes said the system could not continue on this basis “without the banking system imploding”.

He said that after the collapse of Northern Rock a contingency plan was prepared but insisted it was not a live prospect at that time.

He said there was a fear for the system but did not reflect any one institution.

The former director general said that changed in February 2008.

Mr Grimes said “we moved beyond the stage of thinking it may never happen to the realisation we better be prepared in case.

“There were a lot of discussions. It became clear then it (the guarantee ) was a possibility at some stage.”

Mr Grimes insisted there was no basis for Government intervention in early 2008 because the institutions were solvent.

The inquiry heard of an informal meeting between the Taoiseach, Central Bank, National Treasury Management Agency on September 26th 2008.

Mr Grimes said the solvency of the banks was discussed but said the real purpose of the meeting was to discuss what “might be coming down the road in the coming days”.

He said it was a discussion about a report commissioned by the Department.

He said the Financial Regulator told the meeting two banks were not insolvent but “illiquid”.

Mr Grimes said it was told by a Department of Finance official said one bank had a € 2 billion hole and another had € 8.5 billion.

He said nobody walked out of the meeting thinking the banks were insolvent.

Socialist TD Joe Higgins said it was becoming clear that it was known at the highest level politically and financially that two banks were insolvent days before the guarantee.

But Mr Grimes insisted this was not the case and that it was clear to him the institutions were “under stress” but were solvent.

The inquiry was told that “an urgent and decisive intervention was required that would not just finance the outflows but change the dynamic of the unprecedented scale of liquidity losses and prevent contagion from Anglo to the rest of the system.

“The policy instruments available for decision by the government were limited to Emergency Liquidity Assistance, a government guarantee of liabilities of all six banks or nationalization of Anglo and/or INBS with a guarantee extended to the other four banks.

“A Special Resolution Regime was not available at that time.”

He said there were concerns that some of the Irish institutions had solvency issues from the Spring of 2008.

But Mr Grimes said that did not extend into having a clear view of the extent of the problem.

He said “liquidity issues were also raised at the Roundtable with the banks in February 2008.

“Also, a balance had to be struck between recognising the emerging tensions in the money markets on the one hand and generating sentiment that would amplify such tensions on the other.

“During the course of 2008, the previously integrated money market broke into national segments and the non-deposit funding sources became increasingly short-term.

“In my view, no stress test conducted at that time would have reproduced the liquidity conditions which, in fact, prevailed from the late summer and autumn of 2008.”

Mr Grimes said the Central Bank discussed the possibility of a guarantee on September 21st and 25th 2008.