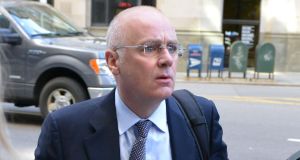 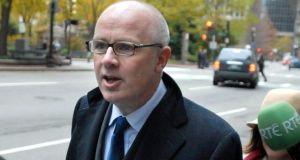 A majority of members of the Oireachtas banking inquiry do not support David Drumm’s offer to provide video evidence to the committee from the United States.

Inquiry chairman Ciarán Lynch of the Labour Party, Sinn Féin’s Pearse Doherty, Labour Senator Susan O’Keeffe and Fine Gael TD Kieran O’Donnell said they would await legal advice at a private meeting of the committee next Tuesday before making a decision. Fine Gael’s John Paul Phelan could not be reached for comment.

Mr Drumm left Ireland for the US almost six years ago after his departure as chief executive of Anglo Irish Bank and has refused to return since.

An Garda Síochána has sought to interview him in relation to various legal matters relating to the collapse of Anglo, which was nationalised in January 2009 and received a bailout from taxpayers of close to €30 billion.

Mr Barrett said he would listen to the legal advice next week but his instinct was to say no to Mr Drumm appearing by video link. “It would be virtually unprecedented for the Parliament to afford a platform to a person who is refusing to co-operate with An Garda Síochána,” he said.

Fine Gael TD Eoghan Murphy said accepting Mr Drumm’s evidence via video link could damage the work of the inquiry and insisted he would not attend the committee if this were to proceed.

“For me this is a matter on which the inquiry’s integrity rests and may have serious implications for the future of our work,” he said.

“Mr Drumm should appear in person, as he has been directed to do. Failing that, the inquiry cannot give special treatment to a person who is of interest to the gardaí, who will not comply with their requests.

Mr Higgins and Mr MacSharry also object to Mr Drumm appearing by video link. Mr MacSharry said Mr Drumm should appear “as expected” and the inquiry cannot facilitate someone who is the subject of Garda investigations.

Mr McGrath also said he had written to Mr Lynch as inquiry chairman to request the view of the Director of Public Prosecutions in relation to Mr Drumm giving evidence by video link. It is understood the DPP has been asked to make its views known to the inquiry’s legal team by Monday.

“I am deeply concerned that comments made remotely from the United States could prejudice forthcoming criminal trials in Ireland,” Mr McGrath said.