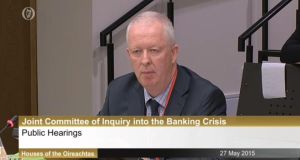 Speaking at the Oireachtas Banking Inquiry on Wednesday, Con Horan said he was “sorry the system of supervision did not prevent the collapse of the banking system”. Screengrab: Oireachtas TV

The former prudential director at the Irish financial regulator expressed his “deep regret” that there wasn’t a more “intrusive” approach taken to prevent the collapse of the banking sector in late 2008.

Speaking to the Oireachtas Banking Inquiry on Wednesday, Con Horan said he was “sorry the system of supervision did not prevent the collapse of the banking system”.

Mr Horan told the committee he spent his first 10 months as prudential director from February 2006 trying to introduce measures to curb property lending in Ireland.

However, this met with “resistance” from senior management within the Central Bank, while there was also an “absence of public support” for his reforms.

Mr Horan said he held “views contrary” to the “group think” on property lending that existed in the Central Bank and the financial regulator.

“The formal proposals I made in August 2005, as head of banking supervision, for higher capital charges for high loan-to-value mortgages were not accepted, as they were not considered by senior management in the CBFSAI [Central Bank/Financial Regulator] to be necessary,” he said.

“It was my understanding that part of the reasoning was a macro-prudential view that developments in the market could be explained by economic fundamentals.”

Mr Horan said he represented his proposals on his first day as prudential director in February 2006, seeking to introduce capital measures to address high loan-to-value lending.

He said this was the first time in almost a decade of an “exceptional property market” that direct regulatory intervention was instigated.

“I took these measures immediately on my appointment to signal to the banking industry that the approach to property-based lending was changing under the new senior management regime,” he said.

“Taking such measures represented a significant move for IFSRA, as it ran counter to principles-based regulation. The measures were considered to be of such importance that the Cabinet was to be informed - an action that was unprecedented in the organisation.”

Mr Horan said his proposals were accepted in 2006 and helped to cool property lending at the time.

“After significant internal debate in 2006, higher capital charges were agreed for speculative commercial property lending. These measures were the most stringent in Europe, ” he explained.

“Other measures introduced in relation to buy-to-let mortgages were also considerably more conservative than those that applied elsewhere.”

With hindsight, Mr Horan said it is obvious the regulatory approach adopted in lreland was inadequate, and failed to deliver a safe and sound system. “This is a matter of deep regret,” he said.

He said the system afforded “far too much scope to the banks and placed too much faith in the boards and management and their control systems for risk management, internal audit and compliance”.

Mr Horan said that in May 2005, he proposed to the financial services authority a corporate governance regime for banks and building societies. “This proposal was to impose a formal condition on the licences of all credit institutions, thereby laying a strong foundation for the taking of enforcement actions under the administrative sanction regime that was being developed at that time. However, the proposal was not implemented,” he said.

Fine Gael deputy Eoghan Murphy asked if some intervention was considered by the regulator in March 2008, around the time that Anglo Irish Bank’s share price tanked.

“It wouldn’t be clear to me what the intervention would have been at that stage that would have made a significant difference,” he said.

Mr Horan added that it would have been better if the the European Central Bank had made additional liquidity available at that time, as it did in subsequent years.

He said that from 2007 measures were being considered to “oil the wheels” of the financial system here and to ease liquidity concerns.

He said external consultants had been appointed to assess the banks at the time. “We probably were awaiting their responses at that time,” he said.

Mr Horan said the Basel process that set capital requirements for banks before the crash in 2008 was inadequate.

He noted the Irish banks now hold about seven times more capital on their books than before the crash. They would have needed “at least” double to triple the levels held at that time to weather the storm.

In relation to his concerns in 2005/06 about property lending, Mr Horan said the “predominant view” at the regulator was that interest rates would rise and that the market would “calm”, and further intervention would not be necessary.

“Personally, I didn’t subscribe to that view,” he said.

An attempt by Sinn Féin deputy Pearse Doherty to reference the Anglo Tapes and Mr Horan’s involvement in the recordings that emerged into the public arena in 2013 was ruled out of order by committee chairman Ciaran Lynch on legal grounds.

In reply to a question from Fine Gael deputy Kieran O’Donnell, Mr Horan said he was in the Central Bank offices on the night of the bank guarantee but had no role in the decision that was taken.

“I was in Dame Street and my role was to provide information if ...needed in the course of the discussions. I don’t think we got any inquiries that night for additional information,” he said.