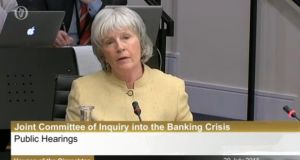 The Government’s decision to issue a blanket bank guarantee in September 2008 was “indefensible”, according to Ethna Tinney, a former non-executive director of the EBS Building Society.

Ms Tinney, who battled the board of EBS on many occasions during her first term as a director between 2000 and 2007, said Irish banks were also “taken in” by Irish property developers in the years before the crash in late 2008.

On the guarantee decision, Ms Tinney said: “My personal view as a citizen of the Republic of Ireland, perhaps to some extent influenced by hindsight , is that it was indefensible for the government in September 2008 to in effect yield the sovereignty of this country in order to shore up a banking system that is entirely of and for itself and will never change.”

On property developers, Ms Tinney said: “The senior management in EBS, as in most of the lending institutions , were taken-in by Ireland’s so-called developers and also by their professional and other advisers.

“So were the members of the board, including me. The belief that there were substantial profits to be made for the society from those developments led us to emulate our peers, although we had been cautious about joining the bandwagon.

“There was a sort of feeding frenzy as the banks clambered over one another to get a piece of the action, especially as new foreign banks had entered the market as competitors.”

Ms Tinney recalled how, as a member of the credit committee from the end of 2006, she was inundated via email by proposals from EBS senior management on behalf of developers for “quantities of cash in the tens of millions which appeared to be asset -backed and also to contain personal guarantees”.

“Typically, as a member of the credit committee, your approval or lack of it had to be sent also by email to EBS by close of business the same day or the next day,” she said.

“The rationale was that if EBS did not facilitate the developer another bank would and we would simply be losing out on the business.

“It did occur to me many times that the EBS credit committee should be meeting about each of these large proposals but my colleagues on the committee seemed happy to do the business this way, and as I had clashed with the majority of the board over several matters at this stage I had no appetite for further confrontation.”

Ms Tinney said she was also “uneasy” at the idea of mortgage securitisation.

“In simple terms this is a way of packaging up mortgages into an asset and selling them on to a new layer of investors, who agree to pay a percentage of the nominal value of the loans in return for an agreed interest so that their money can be lent on again for new mortgages,”she explained.

“It is ingenious in its way, as it is a system that seems to offer limitless working capital for a lending institution. But there is nothing to stop the new investors selling on their asset at a profit, and so on ad infinitum.

“Viewed that way it has the look of a pyramid scheme, and all depends on the original mortgages continuing to be serviced, and becoming more expensive for the mortgagees.

“I could not get the image out of my head of a shark eating its own entrails. As time went by I became ever more doubtful of the fundamental banking concept of loans as assets, and indeed of debts in any business as assets.

“The only asset that reassures me is something I can control and I cannot control the repayment of debt owed to me.”

This became apparent when the board of EBS was advised that an employee in the treasury department had “illicitly” engaged in proprietary trading strictly against the rules of the society, she said.

“Strangely, this same employee had been previously present with his manager at a board meeting when non-executive directors had probed the possibility of just such an illicit trade being made,” she said.

The board was reassured at the time by the executive directors that such a thing could not happen because of so -called “back-room controls”, Ms Tinney added.

“These evidently failed and EBS sustained a significant loss,” she explained.

“You get a bonus for lending money out. There is no incentive to get it back in. Such a system encourages greed and recklessness. It is no wonder that banks go bust from time to time.”

Her comments to the inquiry relate to her first term as a director.