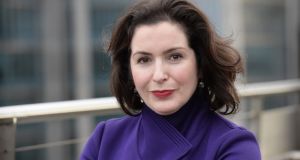 Bank of Ireland chief executive Francesca McDonagh: said the so-called core banking systems programme was “a big part of the work were are doing on our systems”. Photograph: Dara Mac Dónaill

Bank of Ireland has hired a former National Australia Bank (NAB) executive to lead the key €900 million information technology (IT) programme that the group’s chief executive, Francesca McDonagh, inherited when she joined the lender last October.

Steve Collier, who had been in charge of a 350 million Australian dollar (€223 million) annual budget as leader in core banking transformation at NAB between 2009 and last year, will join Bank of Ireland on February 12th. He has had more than 30 years’ experience in banking, having held senior roles in retail, credit and a number of strategic programmes at the Australian lender.

In an email sent internally by Ms McDonagh this week, the chief executive said the so-called core banking systems programme was “a big part of the work were are doing on our systems”, which was “helping to transform how we serve our customers, make things simpler and easier for them, and meet new regulatory requirements”.

The bank hired Swiss software company Temenos in late 2016 to replace its ageing banking systems. According to a Bank of Ireland investor presentation in August, the overhaul, known as Project Omega, is critical to the bank reducing its costs to less than 50 per cent of income over the medium term, from 58 per cent last year.

Ms McDonagh will be expected by investors to give much more detail on the programme’s aims and outline medium-term financial when she hosts a capital markets day in June.

A successful implementation of the IT programme is seen by analysts as key to Bank of Ireland’s future stock market performance, as its shares are currently trading at a discount to rival AIB relative to how the lenders price their assets on their balance sheets, or what is known as “book value”.

The Irish Times reported in October that Bank of Ireland executives had been planning that the IT overhaul would lead to the lender cutting more than 1,000 jobs – or almost 9 per cent of its workforce as of the end of 2016 – from 2019.

The banks staff count has dropped almost 30 per cent from more than 16,000 in 2008 as it and other lenders sought to slash costs in the wake of the financial crisis as the size of their businesses contracted.

Bank of Ireland had appointed Maureen Stanley as interim programme director for the banking systems programme last June. She will now return to her role as group head of integrated planning.

1 Why gift a son now if it eats into his tax-free inheritance threshold?
2 Can we finally say farewell to the scourge of hot-desking?
3 Big Four told to outline plans for audit split in UK by October
4 Dispute over €2.95m sale of Georgian property struck out
5 Vienna digital rights group takes court action over DPC complaints progression
6 Flights abroad ban could last all summer
7 Mortgage arrears: Prevention is definitely better than cure
8 Global markets surge after positive economic news in Far East
9 Court told hearing into dispute over Setanta Centre redevelopment not so urgent
10 Sean Dunne contempt case to be heard in November
Real news has value SUBSCRIBE