Baillie Gifford picks Dublin over Luxembourg to Brexit-proof its business 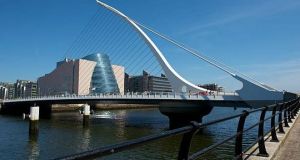 Baillie Gifford selected Dublin after a lengthy search. It had also considered Luxembourg

Baillie Gifford, one of the UK’s most successful asset managers, is to establish a Dublin offshoot to avoid being cut off from its growing number of European clients after the UK leaves the EU.

The Edinburgh-based manager, with £193 billion (€216.7bn) of assets under management, selected the Irish capital after a lengthy search. It had also considered the European fund hub of Luxembourg.

“Baillie Gifford has seen growing demand from clients from across Europe,” said Andrew Telfer, joint senior partner at the fund house. “We are committed to servicing our existing EU-based clients as well as expanding further. We have been exploring various options to allow us to continue this development ahead of the UK’s planned exit from the EU.”

The move follows similar expansions in Dublin by the likes of Legal & General Investment Management, Standard Life Aberdeen and State Street Global Advisors. Fund managers have had to put their Brexit contingency plans into action in recent months as a hard break from the EU appears more likely.

Britain’s £8 trillion asset management industry is one of the most vulnerable sectors to the loss of valuable passporting rights that allow companies to sell products across the continent from the UK.

Several managers have decided to ensure they can continue to deal with European customers by setting up separate management companies and funds in finance centres such as Dublin and Luxembourg.

Regulators in Ireland and Luxembourg have in recent weeks warned UK-based asset managers to speed up their Brexit contingency plans as they fear being overloaded by last-minute applications for licences.

Sharon Donnery, a deputy governor at the Central Bank of Ireland, the country’s financial regulator, said in June: “The risks arising from Brexit, especially a hard or disruptive Brexit, are far-reaching for Ireland. The window of opportunity for resolving a range of issues for firms is closing fast, and contingency plans need to be fully prepared.”

Baillie Gifford is one of the UK’s biggest independent fund managers, and is widely respected for its active approach to investing. It was the second-best selling UK manager in the first half of the year, scooping up $7 billion of net mutual fund inflows in a challenging period of investment companies, according to Morningstar, a data company.

The Central Bank of Ireland has yet to grant authorisation for the new office, and Baillie Gifford has not confirmed how many people will move to Dublin or be hired there. However, it said Edinburgh would remain the company’s main decision-making centre and base for the majority of its 1,047 staff.

It already has offices in London, New York and Hong Kong. – Copyright The Financial Times Limited 2018.