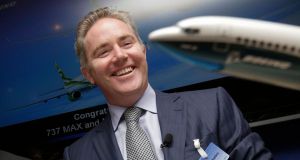 The owners of Dublin-based aircraft leasing company Avolon are considering a partial sale or stock market flotation of the business, The Irish Times has learned.

It is understood that the company has hired JP Morgan Chase and Morgan Stanley to advise it on a possible transaction, which would be likely to take place in the second half of this year.

Any initial public offering of the business would be likely to take place in New York. It is not clear how much the business might be worth.

Avolon was founded in 2010 by Irish financier Dómhnal Slattery. It is incorporated in the Cayman Islands, but domiciled and run out of Dublin.

In total it has raised more than $7 billion in capital and has a portfolio of 198 aircraft.

The company employs more than 50 staff, and has offices in Dublin, Dubai, Singapore, Hong Kong, China and the US.

Avolon has the youngest fleet of any of the aircraft lessors. In a trading update published in January Avolon said it delivered 34 aircraft to customers last year valued at more than $2 billion. It added seven new customers in 2013 to bring its total to 41 in 25 countries.

Last month the company announced it had secured a $500 million debt facility to finance new aircraft deliveries this year. It is an eight-year facility, maturing in December 2022.

“This position of strength is allowing us to continue capitalising on the opportunities within our sector to deliver sustained growth and superior returns for our shareholders in 2014 and beyond.”

Track record
Mr Slattery has a long track record in aircraft leasing. He started his career in this sector with GPA in Shannon and then GECAS. In 1994 he set up International Aviation Management Group before selling it seven years later to Royal Bank of Scotland.

The Clare businessman then went on to set up investment group Claret Capital, which was hit by the global financial crash in 2008.