Application to join KPMG to INBS case may be made

KPMG acted as auditors to the society for some 20 years 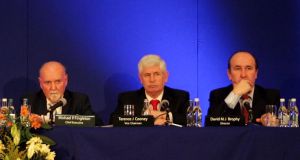 An application may be made to join accountancy firm KPMG as a defendant to a legal action arising from some €6 billion in losses at Irish Nationwide Building Society. KPMG acted as auditors to the society for some 20 years.

Terence Cooney, one of four former INBS directors being sued separately from former chief executive Michael Fingleton arising from the losses, wrote earlier this year to the Minister for Finance claiming it was “preposterous” that the two special liquidators of State- owned IBRC, Kieran Wallace and Eamonn Richardson, both partners in KPMG, were not suing their own firm for alleged negligence.

Mr Cooney previously secured orders joining KPMG as a third party to the proceedings brought against him and the other former directors, but he argues that KPMG should be joined as a defendant to the case, brought by IBRC and INBS.

Edward Farrelly, for Mr Cooney, yesterday secured permission from Mr Justice Peter Kelly to bring an application to have the Big Four accountancy firm joined as a defendant if the Minister did not direct the plaintiffs to do so before July 28th.

Paul Sreenan SC, for KPMG, said it had delivered its defence to the third-party claim made against it.

Mr Justice Kelly made directions for the hearing of discovery applications by Mr Fingelton and three former directors. He said Mr Farrelly could issue a motion seeking to join KPMG as a defendant if a decision on advice by solicitors Eugene F Collins, who had been engaged in February to carry out an independent review on that issue, was not made by July 28th.