Anglo verdict: who is Peter Fitzpatrick?

A profile of the former ILP executive found not guilty 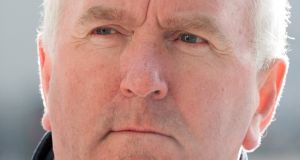 The jury in the long-running Anglo trial has found Peter Fitzpatrick not guilty of conspiring with others to create a false impression as to the health of Anglo Irish Bank in 2008.

A chartered accountant by training, Mr Fitzpatrick was a partner with Coopers & Lybrand (now part of PwC) establishing himself as an examiner before joining the executive ranks of the financial sector. He was appointed to the board of Irish Permanent in 1992. The former building society subsequently merged with Irish Life to form Irish Life & Permanent plc.

Mr Fitzpatrick was regarded as a key player in driving the demutualisation and flotation of Irish Permanent and its subsequent merger with Irish Life in 1999. He retired from the board of IL&P and ceased employment with the company on February 13th, 2009 after the €7.2 billion deposit transaction with Anglo emerged. He was paid €719,000 in 2009, down from €988,000 in the previous year. This included a payment of €540,000 in lieu of notice as per the terms of his contract.

Other past roles included acting as a non-executive director of the former Jurys Doyle hotel chain, and as non-executive chairman of Dalata Ltd, an Irish hotel management company.

Mr Fitzpatrick is 63 and lives in Portmarnock, Co Dublin.