Branch closures in Northern Ireland also believed to be under consideration 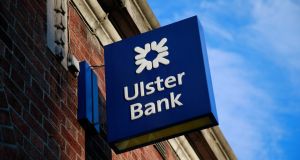 Ulster Bank: has already closed a large number of branches since the crash. Photograph: Nick Bradshaw

Ulster Bank is believed to be planning to close up to 30 branches in its network in the Republic as part of a major restructuring of the business here.

The bank currently has 110 branches in the Republic and the move follows a review of the bank’s operations by global consulting firm McKinsey, which was engaged by the bank’s recently installed chief executive, Gerry Mallon.

It also reflects the greater role played by technology and digital banking in how Ulster Bank delivers services to its 1.1 million customers here, and a need to reduce its significant cost-income ratio.

Ulster Bank in Northern Ireland, which operates separately from the business south of the Border, is believed to be considering closing some of its 65 branches.

Staff have yet to be informed of the details of the rationalisation programme, although officials from the Financial Services Union (FSU) are due to meet management later this month for an update on its plans.

FSU general secretary Larry Broderick said a major programme of branch closures could have a “devastating impact” on staff and customers, particularly in rural areas.

“I would be hopeful that the bank would not proceed with branch closures,” he said.

A spokeswoman for Ulster Bank said no branch closures have been announced, adding that such matters are kept under constant review.

Under the terms of a deal between the bank and the FSU, any branch closures would involve voluntary rather than compulsory redundancies, along with possible opportunities for some staff to be redeployed.

Ulster Bank has already closed a large number of branches since the crash. In 2007, it had 58 First Active and 132 Ulster Bank branches and sub-offices. In 2010, after the brands had merged, its total was 146 branches.

The move comes as Ulster Bank seeks to tackle its high cost-income ratio, which came in at 116 per cent last year, compared with 78 per in 2015. Even when adjusted to exclude certain exceptional costs, the ratio was 80 per cent, well above the 50 per cent target that most retail banks in Ireland have set for themselves.

The bank’s direct staff costs last year rose by 14.5 per cent to €252 million. Ulster Bank made an operating profit of €24 million in 2016, down from €362 million in the previous year. This reflected both a reduced level of impairment writebacks and some €211 million in litigation and conduct costs, mainly associated with its mortgage tracker review.