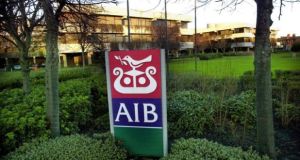 AIB chairman Richard Pym has said the bank is looking at both internal and external candidates to succeed David Duffy as chief executive, and that it would make an appointment within the Government’s €500,000 salary cap.

At a media briefing to announce AIB’s €1.1 billion pre-tax profit for full-year 2014, Mr Pym said: “David is contractually tied to us until the summer but I’m very aware that he’ll get a bit itchy towards the end of that time if we hold him too long.

“We’ve got to get a move on [with recruiting a successor], that’s absolutely clear. We are in a much more fortunate position than when David came here [IN 2011]in that there are some viable internal candidates and we’re also looking at some potential external candidates as well.

“I am completely confident that we will find a first-rate CEO of AIB within the pay cap. It isn’t going to be a problem.”

Mr Pym said the timing of any IPO of the bank by the State, which owns 99.8 per cent of the equity, was “up to the shareholder”.

“You can see from these results that this bank is trading very well and is therefore a much more valuable property than it was. We think that value will increase over time. It’s a very valuable asset.”

He said all of the €20.8 billion in bailout funds would be “recovered over time” by the State, adding that the paying of a first dividend of €280 million on its €3.5 billion worth of preference shares, which date back to 2009, was a “very good first step”.

On the reasons behind his surprise resignation in January to become the head of Clydesdale Bank in the UK, Mr Duffy said: “I’ve completed the job that I was asked to do…and as I looked out to the future I felt that I would have to commit to quite a number of years to see capital and IPO actions happen and that this was a very logical juncture for me to hand over to a very capable team.”

The bank said new lending approvals rose by 37 per cent to €13.2 billion while total impaired loans decreased by 23 per cent since December 2013.

Separately, AIB’s annual report shows that Bernard Byrne, who heads its personal, business and corporate activities and is tipped to succeed David Duffy as chief executive, was the best paid director last year with total remuneration of €570,000. This comprised a salary of €450,000, annual taxable benefits of €30,000 and a pension contribution of €90,000.

AIB said the number of Irish owner occupied mortgage accounts in arrears declined by 22 per cent in the year. The bank had a total provision writeback of €188 million in 2014 compared to €1.9 billion charge in 2013 reflecting the improved economic environment and progress in restructuring of impaired loans.

Total income rose by 31 per cent to €2.5 billion with its Irish and UK businesses both profitable in the year.

AIB’s results showed continued improvement in its net interest margin, a key measure of profitability. In the second half of 2014, its NIM rose to 1.78 per cent from 1.45 per cent a year earlier.

AIB said discussions “continue” with the Department of Finance regarding the appropriate capital structure for the bank in the context of regulatory and market requirements.

These are focused on options in relation to the preference shares, including the possible conversion into ordinary shares of part or all of them.

Based on the closing share price on March 3rd, AIB trades on a valuation multiple of about 6 times (excluding the preference shares) the net asset value of the group as at 31 December 2014.

“The group continues to note that the median for comparable European banks is circa 1 times NAV,” the bank added.

Minister for Finance Michael Noonan welcomed AIB’s return to profit, which he described as encouraging.

“AIB is becoming an increasingly valuable asset and today’s results put the taxpayer in a strong position to regain the €20.8 billion investment in the bank. Our attention now turns to the process of examining the range of options available to recoup this investment for the taxpayer,” he said.