Vote on new plan to take place at egm on December 16th; Goldman Sachs will no longer advise Department 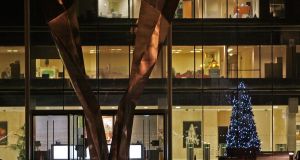 AIB’s headquarters in Ballsbridge. The bank said on Monday it will hold an egm on December 16th to seek shareholder approval for its new capital reorganisation plan. (Photograph: Eric Luke / THE IRISH TIMES)

AIB shareholders are to vote on the bank’s new capital re-organisation, which will see the value of their shareholding in the bank almost wiped out, at an egm on December 16th.

The bank announced its plans for an egm on Monday morning, as the first step in its plan to return to the markets next year and allow the Government to divest some of its 99.8 per cent stake in the bank.

It follows the release of its capital organisation plan last week, which sets out AIB’s intention to consolidate stock on a 1-for-250 basis and allow the government to convert some of its preferred shares into ordinary stock at 1.7 cents each. The 1.7-cent valuation is the basis under which the government plans to convert some of its € 3.5 billion of preferred stock in the bank into equity.

The reorganisation will see retail shareholders, who still hold about 1 billion shares in the bank, see the value of their AIB shares plunge by as much as 90 per cent. Shareholders have repeatedly been warned that the bank is overvalued.

AIB stock has plunged since the announcement, closing at 4 cent on Friday, down from 7 cent at the start of the week.

In a statement to the stock exchange on Monday, the directors of the bank, apart from Dr Michael Somers, who was appointed to the board by the Minister for Finance and hence abstained from recommending the transaction, said that the reorganisation is “in the best interests of AIB and AIB’s shareholders as a whole”.

John Cronin, financials analyst with Investec, says that holding the egm in 2015 means that the bank has the time to effect the relevant restructuring actions prior to year-end, thereby normalising its capital structure for year-end reporting purposes - in advance of a much-awaited potential capital raising next year.

Mr Cronin expects that in the meantime, the bank will “swiftly move” to launch its maiden AT1 issue of some €500m.

AIB said its return to the subordinated debt market won’t automatically lead to a resumption of coupon payments on about $150 million of junior bonds that escaped a bail-in during the financial crisis. “We do not believe that the AT1 issuance triggers any requirement to pay a coupon” on the old bonds, Niamh Hennessy, a spokeswoman for the state-owned lender, said by e-mail. “Payments are at the discretion of the bank.”

AT1, or additional Tier 1, notes are the riskiest form of bank debt. The Dublin-based lender halted payments on the old bonds, including £78.7 million of 12.5 per cent notes, in 2009 as part of a government rescue. The notes have risen this month amid optimism that the bank’s first sale of junior debt since Ireland’s banking crisis enhances the prospects for an eventual resumption of payments.

“There is definitely a gap between investor expectations and the issuer’s,” said Gildas Surry, an analyst and portfolio manager at Axiom Alternative Investments, who advises clients owning the 12.5 per cent bonds.

Surry said he was “disappointed” by an investor meeting with AIB last week, where he discussed the old notes. The bank should clarify its position on whether it will resume payments before starting the additional Tier 1 sale, he said. “We haven’t seen an issuer doing an AT1 while not having resolved such a difference of views,” he said. Hennessy declined to say whether the lender intends to pay coupons on the old bonds after its EU state-aid restructuring plan ends in late 2017. It can’t make any discretionary coupon payments before then.

Also on Monday, the Department of Finance said that it is looking to appoint a new adviser to work on the capital reorganiation of AIB, as Goldman Sachs ’ term as advisor is due to end. The adviser will be chosen from a panel which includes Bank of America Merrill Lynch, Credit Suisse, JP Morgan, and UBS.