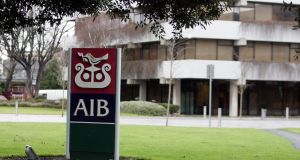 The bank said that the outcome for the period was also helped as its net interest margin.

AIB reported a €762 million pre-tax profit for the first half of the year, helped by a €140 million gain from the sale of non-performing loans to a group led by US distressed-debt firm Cerberus.

The bank said that the outcome for the six months, while consistent with the same period last year, was also helped as its net interest margin, the difference between the average rate at which it funds itself and lends on to customers, remained at 2.5 per cent, well ahead of its 2.4 per cent medium-term target.

The lender’s profits were also boosted as it freed up a further €130 million of provisions that had previously been set aside for bad loans, helped by rising property values and a strong economy. Goodbody Stockbrokers analyst Eamonn Hughes said he had not expected the bank to release provisions during the period, which is the main reason why AIB’s earnings were 18 per cent above his projection.

“The financial results for the first half of the year were very good and towards the upper end of expectations,” said chief executive Bernard Byrne. “The Irish economy is performing well and we are maintaining robust positions in our core markets.”

Having fallen by almost 11 per cent since the start of the year, AIB’s shares edged 0.8 per cent higher to €4.94 in early trading on Friday. The Government sold an initial 28.8 per cent stake in the bank in June last year to stock market investors for €3.4 billion, as it continued to claw back taxpayer funds from the group’s €20.8 billion rescue during the financial crisis.

AIB’s loan book, which has contracted over the past nine years in line with the wider Irish banking sector, grew by €500 million during the first half, excluding the impact of the non-performing loans disposal to the Cerberus-led consortium during the period.

On a reported basis, net loans shrank by €100 million to €59.9 million at a time when rival Bank of Ireland is expected to confirm next week that it returned to loan growth in the first half.

Non-performing loans (NPLs) fell by 27 per cent at AIB during the first half to €7.5 billion, with its bad-loans ratio declining to 12 per cent from 16 per cent, as a result of the portfolio sale and as the bank continued to restructured problem debt.

The bank said it remains on track to reached “normalised” non-performing loan levels by 2019, with the European Central Bank pressing lenders across the euro zone with large NPLs to cut their ratios to the European Union average of 5 per cent.

Operating costs rose marginally to €711 million at AIB in the first half, driven by investment in loan restructuring operations.

Davy analysts Stephen Lyons and Diarmaid Sheridan said that AIB’s ability to increase its common equity Tier 1 capital ratio, a key measure of a bank’s reserves to withstand a shock loss, to 17.6 per cent from 17.5 per cent at the end of December underpins an expectation in the market that the group will be able to return excess capital to investors over time.

The ratio increased even as AIB set aside money for dividends and new accounting regulations, known as IFRS 9, which require lenders to set aside provisions for expected future losses on loans, rather than losses that have already occurred.