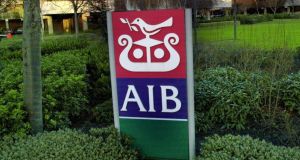 The State owns 99.8 per cent of AIB’s ordinary shares and also holds €3.5 billion in preference shares and €1.6 billion in contingent capital notes

AIB has appointed leading Irish law firm McCann Fitzgerald to advise it on its proposed capital restructuring and “other related matters” connected with the State’s investments in the bank.

The appointment followed a tender process and comes in the wake of the selection of advisers by the State in relation to AIB. The Department of Finance recently chose global investment bank Goldman Sachs and Irish law firm William Fry to advise the Government on potential restructuring actions at AIB.

The State owns 99.8 per cent of AIB’s ordinary shares and also holds €3.5 billion in preference shares and €1.6 billion in contingent capital notes, or CoCos as they are better known.

A flotation of AIB is expected as part of this restructuring of the State’s holdings in the bank, although it could be next year before this happens. AIB recently appointed Catherine Woods as its senior independent non-executive director, a move that was seen as a signal that it is preparing to return to the main market of the Irish Stock Exchange.

It is listed on the junior ESM market in Dublin, which has less onerous listing rules. Based on its share price, AIB is valued at about €39 billion and has 523 billion ordinary shares in issue.

However, at the end of last year, the National Treasury Management Agency valued the State’s holding in AIB at €11.7 billion. The bank received a €20.8 billion bailout from taxpayers between 2009 and 2011. AIB is also expected to pay a dividend on its preference shares for the first time this year.

Plans for a restructuring of AIB’s capital base continues to proceed in spite of its chief executive David Duffy resigning from the position in January and the bank beginning the search for a replacement.

McCann Fitzgerald has had a long-standing relationship with AIB, securing a number of appointments in recent years. It advised AIB on a separate €500 million worth of covered bond issues in November 2012 and January 2013.

In April 2012, it advised the bank on the sale of its Polish fund management subsidiary while in July 2011 it worked with AIB on its acquisition of EBS Building Society, which had also been bailed out by the State.