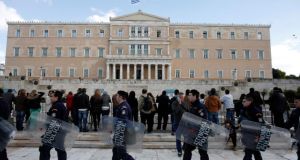 Riot police outside the parliament following a final vote by lawmakers for a new Greek president in Athens, Greece. Photographer: Kostas Tsironis/Bloomberg

Greece’s financial markets are in turmoil as a vote in parliament – failing to elect a new president – made a general election inevitable. The question now is whether this will spread to wider market volatility across Europe in the run-up to the general election, due on January 25th, and, more importantly, what will happen after the election.

The left-wing, anti-austerity Syriza party is ahead of the incumbent New Democracy, led by prime minister Antonis Samaras, in the polls. It will campaign on the platform of an end to austerity and a re-negotiation of Greece’s debts to the EU. This may well cause conflict with the other EU countries, particularly Germany, and the ECB, leading to fears of renewed euro zone instability.

Already Greek markets have reacted violently , with yields on Greek government bonds rising and shares prices dropping 7 per cent yesterday, with bank shares falling by even more. Market reaction elsewhere was muted in quiet pre-Christmas trading, but Greece will now – again – be a key focus for investors moving into 2015.

Greece’s main creditors are no longer private investors. Of around €320 billion in total national debt, it owes more than €200 billion to the EU after the bailout, and close to another €60 billion is owed to the ECB and the IMF.

In February, Greece’s EU/IMF bailout programme will end. Negotiations with the EU and IMF on a post bailout credit line will now be on hold until after the election. But after four years of savage cut and with the government’s budget already roughly in balance, Syriza, led by Alexis Tsipras, says another way forward must be found.

Syriza has called for half of the national debt to be written off and for the ECB to agree to buy Greek bonds for a prolonged period. It believes the EU and ECB should be the creditors to be hit – not private investors or the IMF. It also wants Greece to stay in the euro, but says some of the austerity cutbacks must be reversed.

Some of this is presumably an opening negotiating position – but if Syriza gets a strong mandate it raises questions about how Europe will deal with an anti-austerity government. Could Syriza, for example, negotiate a long enough extension of national debt repayments to the EU to make a real difference? Or does it risk running up against a blank refusal from Germany and the ECB, who would be fearful in particular of the precedents that might be set for other bailout countries, including Ireland? With anti-austerity parties of various shapes on the rise elsewhere in Europe, the reaction to a new Greek government will be driven as much by political concerns as financial ones. If ground is given to Greece, then other European countries may argue for leeway, too.

Political and financial uncertainty carries risks. Money could move out of Greece in the run up to the elections, or afterwards. ECB funding for Greece’s banking system, extended on the basis of the bailout being adhered to, could come under threat. Or stalled negotiations after the poll could raise the prospect of Greece not being able to access fresh funds from the EU/IMF, or from private lenders , threatening a default later next year and doubts over its euro membership.

We have seen before how trouble in one euro member can create wider instability – and there are other weak points in low-growth Europe, including a stagnant Italian economy and the wider threat of deflation.

There is still a lot to play out here. Syriza’s lead in the polls is just three or four points over New Democracy, and who knows what will happen during an election campaign. It is possible no one will be able to form a government, triggering further uncertainty. And the knock on effects for the rest of Europe are hard to predict. But, as before during the height of the euro crisis, events in Greece could well be a catalyst as we move into 2015.