‘We are humbled by the opportunity to represent Ireland and the rest of the Stripe team at the EY awards, ’ says Stripe co-founder John Collison 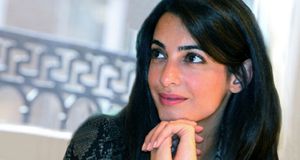 Among the keynote speakers at the EY World Entrepreneur of the Year awards are Amal Clooney, international human rights lawyer at Doughty Street Chambers.

This week the French Riviera rolls out the red carpet not for the movie stars but for entrepreneurs.

Some of the world’s brightest business minds are in Monaco for the EY World Entrepreneur of the Year awards.

The event, now in its 16th year, honours the leading innovators behind new products and services in more than 145 cities across 60 countries.

This year 55 finalists representing 50 countries will compete for the title of EY World Entrepreneur of the Year 2016, which will be announced at an awards ceremony on Saturday night.

Their company, which has been valued at $5 billion (€4.5 billion), recently announced a tie-up with Twitter to let consumers buy products directly with a tweet.

Its move into the social media arena is seen as a game changer and a challenge to Paypal’s dominance of the sector.

“We are humbled by the opportunity to represent Ireland and the rest of the Stripe team at the EY awards,” said John Collison.

Kevin McLoughlin, partner and head of the EY Entrepreneur of the Year programme in Ireland, said: “John and Patrick demonstrate how an innovative idea can be built, scaled and nurtured not only to achieve commercial success, but importantly to help other businesses to prosper and grow their online footprint.”

In addition to Stripe, the 2016 finalists include Malaysia’s Iris corp, inventor of the world’s first electronic passport; Finland’s Supercell, the company behind combat simulator “Clash of Clans” and the UK’s Synergy Health, which manufactures user-friendly health screening kits.

The study found that 59 per cent of entrepreneurs were expecting to hire more staff in the next 12 months compared to just 28 per cent of large corporations.

“The disruptive force of technology is transforming individual companies and creating entirely new sectors. In this environment, entrepreneurs are pivotal drivers of global job creation, and in some cases are navigating economic and political uncertainty better than established players,” EY global chairman and chief executive Mark Weinberger said.

In addition to the overall award, the five-day EY event includes a series of summits, interviews and panel discussions.

The overall winner is chosen by an independent judging panel on the basis of six criteria: entrepreneurial spirit, financial performance, strategic direction, global (or community) impact, innovation and personal integrity/influence.

“An entrepreneur’s ability to take an idea and then build, scale and nurture a great company inspires us. This is why each year we are proud to offer the EY Entrepreneur of the Year program, the pre-eminent recognition of entrepreneurial excellence,” EY’s Bryan Pearce said.