Debt holders will jockey for position at examinership hearing on Friday 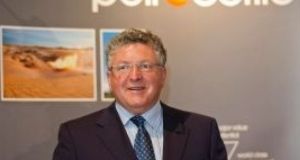 Worldview Capital, the dissident shareholder seeking to gain control of troubled oil and gas explorer Petroceltic International, has sold more than $70 million (€63m) of Petroceltic’s debt to a UK- and Russia-linked fund in the Cayman Islands.

Worldview, founded by Bulgarian investor Angelo Moskov, retains about 37.5 per cent of the debt via a separate Cayman company, which it bought last month at a discount of up to 70 per cent from Petroceltic’s senior lenders.

The remaining 30 per cent of the debt is owned by Standard Chartered bank and NBSA Limited, which is linked to NedBank.

Market sources speculated that Elbrus Capital (Cayman) might be linked to Elbrus Capital, a Moscow-headquartered private equity group whose investments include the Russian broadcasting group that operates Disney there.

However, a spokeswoman for Elbrus in Moscow said: “It isn’t us.”

Documents filed in Companies House in the UK reveal that Elbrus Capital (Cayman) is, in fact, connected with a separate group, Elbrus Capital Partners, which was founded by investment managers Jack Arnoff and Jury Ostrowsky.

A note in the accounts for Elbrus Capital Partners confirms it is connected to the Cayman entity “by virtue of common ownership”.

Mr Ostrowsky and Mr Arnoff have invested in emerging market economies for more than 15 years.

The various holders of the senior debt are in a strong position for jostle for control of Petroceltic’s prime asset, a near 39 per cent share of a huge gas field in Algeria, which is part of the security for the lending.

The ultimate decision on who will eventually gain control of insolvent Petroceltic’s assets will be made by the court-appointed interim examiner, Michael McAteer of Grant Thornton, who will seek court approval if he can formulate a rescue scheme.

Petroceltic is unable to make its debt repayments. Worldview, which owns 29 per cent, has tabled a £6.5 million bid for all of Petroceltic’s equity. The company, which has been in a battle for control with the dissident sharehjolder for more than a yeare, on Wednesday advised shareholders to accept the offer.

The offer could be overtaken by events in the examinership, however, as the equity in the business is likely to be wiped in any scheme of arrangement.

Market sources also suggested that Worldview retains an interest in acquiring the debt held by the banks, Standard Chartered and NBSA.

It is thought that Worldview’s decision to jettison some of the debt to Elbrus was due to rules surrounding the voting rights attached to the debt.