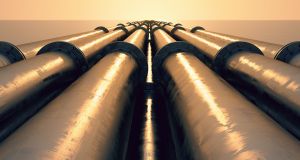 Petroceltic ran out of funds after it was unable to raise cash on the bond markets late last year. It has also been unable to raise fresh equity due to the blocking stake held by Worldview

Worldview Capital, an activist fund based in the Cayman Islands that owns a 29 per cent stake in Dublin-based exploration company Petroceltic International, will have to strike a deal with several third parties, including the Algerian government, if a mooted cash offer by it for the Irish company is to get off the ground.

Worldview, which has been engaged in a bitter dispute with Petroceltic for more than a year over strategy and funding, told the stock exchange yesterday that it was considering making a cash offer for Petroceltic.

It had been involved recently in discussions with Worldview as a shareholder, although it is not thought to have previously held discussions over an offer.

Petroceltic was put up for sale last month and has breached loan covenants on more than $200 million of debt. Petroceltic, whose prime asset is a gas project in Algeria, has been engaged in a strategic review since December, led by Bank of America Merrill Lynch and Davy Corporate Finance.

The Algerian government could have an effective veto over an rescue deal for Petroceltic that involves a change of control. Worldview would also have to get Petroceltic’s banking consortium on board for any deal.

Petroceltic has obtained a waiver from its banks until the end of the month to cover the covenant breaches and has indicated to investors that its banks will give it more time, if necessary, to complete the strategic review.

Petroceltic ran out of cash after it was unable to raise cash on the bond markets late last year. It has also been unable to raise fresh equity due to the blocking stake held by Worldview, which management previously accused of trying to gain control of the company on the cheap.