WordPress warned to comply with orders to remove remarks about Petroceltic 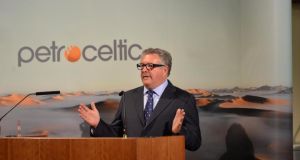 Brian O’Cathain, chief executive officer of Petroceltic. The US owner WordPress has been warned by a High Court judge to comply with orders to remove allegedly defamatory material posted about Petroceltic. Photo: The Irish Times

The US owner of blogging service WordPress.com, has been warned by a High Court judge to comply with orders to remove allegedly defamatory material posted about the Irish-based exploration company, Petroceltic International, and two of its executives.

The company was also ordered to identify the author of blogger.

The orders were secured after barrister Bernadette Quigley for Petroceltic International headquartered in Dublin and its two executives, told the court the blogger concerned had threatened to post further allegations on the site.

Counsel said the allegations posted by the so-far unidentified blogger are entirely unsubstantiated and blatantly untrue.

On Friday morning the matter returned before the High Court.

Mr Justice John Hedigan was informed by Ms Quigley nothing had been done by the defendants since the orders were granted on Thursday. The material complained of had not been taken down counsel said.

Arising out of this failure to remove the material counsel asked the court to consider taking steps against the defendants including imposing a €100,000 a day fine until the court’s orders were complied with.

That application was opposed by lawyers for the blogging service providers.

Barrister Ronan Lupton, for Aut O’Mattic A8C Ireland Limited and Automatic Inc, said there had been some initial confusion about the case. Originally the action was against the Irish subsidiary only which had nothing to do with the servers hosting the blog at the centre of the action.

It was later agreed by consent that the US parent company, Automatic Inc, could be joined to the action. Counsel said it was only yesterday afternoon when the American parent became a party.

Counsel said both Automatic and its lawyers are based in California, which some nine hours behind Ireland.

Mr Justice Hedigan said orders of the court must be obeyed no matter who they are made against. Non compliance of such orders he added is a serious matter.

Noting the application to impose fines the Judge said he was adjourning the matter to Monday’s sitting of the High Court.

The Judge said he hoped that by then the orders granted by Ms Justice Baker would be complied with.