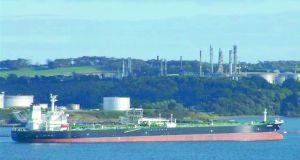 Whitegate, Ireland’s only oil refinery: a “huge amount” of indirect jobs are linked to the site”, Minister for the Environment Denis Naughten said

The decision by a Canadian firm to buy Ireland’s only refinery, at Whitegate, in Cork Harbour, ensures security of supply to the market and contributes to our ongoing economic growth, according to Minister for the Environment Denis Naughten.

Speaking at the official launch of the Irish division of Irving Oil on Monday, Mr Naughten stressed that the Whitegate facility was “crucially important for Ireland”.

“It is crucially important from the point of view that this is the only oil refinery on the island of Ireland. It is much easier to access crude oil than processed oils – petrol and diesel. So it is important from a security point of view that we have an oil refinery on the island. It is not just an Irish issue. It is a European issue as well. Many of the oil refineries across Europe are closing and are being developed in other parts of the world. There is an issue in relation to security. There is also an issue in relation to the environmental standards that may be used to monitor refineries in other parts of the world. Having those refineries here in Europe is important.”

Mr Naughten said that clarity in relation to the ownership of the site was important given that it employs 160 people. There is also the “huge amount” of indirect jobs linked to the site and the opportunity in relation to blending biofuels at Whitegate.

The future of the refinery , which was owned and operated by Phillips 66, was in doubt when the 15-year operating licence ran out during the summer. Irving Oil’s purchase has been welcomed by locals, as the company announced it would be continuing full operation of the plant and maintaining its existing workforce.

The refinery had been on the market since November 2015 when Phillips 66 took the decision to again seek a buyer after earlier attempts to sell it in 2014 failed.