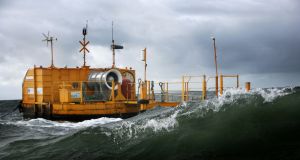 Ocean Energy’s wave energy device will be built in Oregon and tested by the US navy at a site off Hawaii.

A landmark wave energy device designed by Cork-based company Ocean Energy is to be built by US company Vigor, it was announced on Wednesday in Washington. The deal is the latest sign of collaboration between the United States and the Republic in the field of renewable energy.

The new device, which was developed under the aegis of a 2012 memorandum of understanding between the Irish and US governments to develop marine and hydrokinetic energy research, is expected to be put to water in the US navy’s test site off the Hawaiian island of Oahu by the end of the year.

Ocean Energy began testing the wave energy converter in Galway Bay in the late 2000s, benefiting from the specific conditions of the test site which could replicate the scale of open-ocean waves.

Fabrication of the 750-tonne device, known as the “OE Buoy”, will start in Vigor’s plant in Oregon on the US west coast before being transported to the navy test site by the end of the year.

Ocean Energy’s chief executive, John McCarthy, said the unique technology, developed in conjunction with the company’s chief technology officer and emeritus professor of engineering at UCC Tony Lewis, was more environmentally friendly and robust than many offshore wave energy devices, due to the absence of any moving parts.

Mr McCarthy said on Wednesday in Washington that the aim eventually is produce up to 2,000 megawatts of energy in the State through 1,000 devices by 2030.

“Ireland can make five times more electrical power than we need from wave energy alone,” he said, adding that offshore wave energy could play a vital role in helping the State meet its renewable-energy targets in the coming years. Ocean Energy estimates that one device could reduce CO2 emissions by more than 4,370 tonnes a year.

Minister for Foreign Affairs and Trade Simon Coveney said the collaboration was an example of “how transatlantic co-operation can yield immensely productive results” and that the OE Buoy offered a template for future large-scale projects.

Seán Davis, regional director for Enterprise Ireland in North America, said the collaboration showed that Irish SMEs can win business around the world.

Ocean Energy received funding from both the Sustainable Energy authority of Ireland and the US department of energy for the €10 million project.

1 I want to change my will quickly in case I fall ill. Do I need a lawyer?
2 Coronavirus: Property rental in the jaws of the epidemic
3 EU finance ministers hold marathon talks to overcome eurobonds split
4 Firms in row with Irish Distillers must provide €1m in security
5 MCD’s Desmond ‘optimistic’ that Electric Picnic 2020 will go ahead
6 Cold water poured on idea of ‘helicopter money’
7 Irish back pain medical device group to pull stock market listings
8 Collison brothers worth an estimated €2.9bn each
9 NTMA raises €6bn from bond auction to help State meet Covid-19 costs
10 Workers may face tax bill on emergency State wage subsidy
Real news has value SUBSCRIBE