Technology used in new pylon route a first in Europe

Grid West and North-South link cannot use the same system 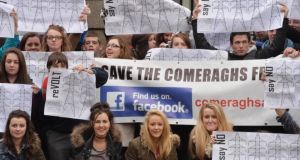 Grid Link is the biggest and most expensive of three projects EirGrid announced in early 2013. Running 230km from Knockraha in Cork, through Wexford, to Dunstown in Kildare, its cost two years ago was estimated at €500 million.

It is about twice the size of the other two projects planned by the national grid operator, the North-South link from Meath to Tyrone and Grid West from Mayo to Galway.

In 2013 EirGrid’s chief executive Fintan Slye said all three were required to achieve two things. The first was to bring wind power from generators on the west coast to the main population centres in the east and south.

However, once it dawned on the public that the three projects involved high-capacity power lines carried on pylons, groups in each of the regions affected launched a wave of protests. Almost all demanded that EirGrid and the Government consider putting the lines underground.

The political heat generated prompted the Government to review the projects. In January last year, then minister for energy Pat Rabbitte set up an expert panel, chaired by Ms Justice Catherine McGuinness, to examine the national grid operator’s options.

In Grid Link’s case there were three: stick with the existing plan, put the power lines under ground or the regional option. This involves boosting the existing high-capacity lines running from Moneypoint, Co Clare to Dublin, and connecting them to the southwest via a cable under the Shannon Estuary. This cuts out the need for new pylons and is far cheaper than putting lines underground.

This will be the first time any European grid operator will have used it. Neil Walker, head of infrastructure, energy and environment with business body Ibec, yesterday called the company’s move “innovative”.

A study earlier this year by consultants, London Power Associates, says the regional option should allow EirGrid deliver on its twin aims of getting electricity from where it is generated to where it is needed and preparing the system for the next 40 years.

According to Mr Walker, Ibec, which represents the Republic’s biggest electricity consumers, favours the solution. “It will secure energy supplies for the southeast and prevent unnecessary extra costs for all energy users,” he said.

However, the regional option will only work for the Grid Link project because it will use existing high capacity power lines and pylons. This rules it out for either the west or north.