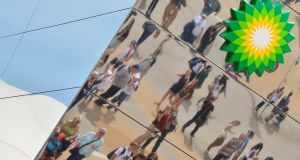 BP said this year’s capital expenditure would fall to around $16 billion and to $15-17 billion in 2017. Photograph: Toby Melville/Reuters

BP reported a near halving in third-quarter earnings on Tuesday and trimmed 2016 spending by another $1 billion as weak prices cut into profits yet the British oil major still beat analysts’ estimates.

BP’s underlying replacement cost profit, the company’s definition of net income, fell to $933 million (€847 million), compared with $780 million expected by analysts and down from $1.8 billion a year earlier. “We remain on track to rebalance organic cash flows next year at $50 to $55 a barrel,” chief financial officer Brian Gilvary said in a statement.