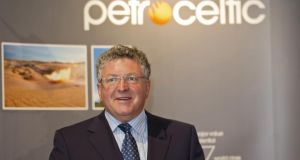 Irish oil producer Petroceltic International said it expected to produce 16.5-18.5 million barrels of oil equivalent per day (mboepd) this year, after its 2014 production was at the top end of its guidance range.

The company said the current volatility in oil markets would have limited impact on its daily business as most of its production was either fixed price gas in Egypt or Bulgarian gas priced on a long-time lag.

Petroceltic has been battling with its largest shareholder Worldview over the last few months. Last week, Worldview announced it was seeking an extraordinary general meeting to replace Petroceltic chief executive Brian O’Cathain.

The Swiss-based investment management group said it also intends to push for its own representative on the Petroceltic board and for the appointment of an independent industry veteran, which it has identified.