Sale of 18.375 per cent interest in Algerian field has been completed by the exploration company 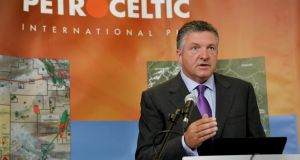 Brian O’Cathain, chief executive of Petroceltic, said that the formal ratification of the agreement “is a critical step in the overall funding plan for this development project”. Photograph: Matt Kavanagh/The Irish Times

Petroceltic International, the independent oil and gas exploration and production company focused on the Middle East, North Africa, Mediterranean and Black Sea regions, has completed the sale of its 18.375 per cent interest in the Isarene PSC to Sonatrach, the National Oil and Gas Company of Algeria.

The deal, which was originally signed by Sonatrach, Petroceltic and Enel at a ceremony in Algiers on February 12th 2014, was subsequently ratified by the Algerian Council of Ministers on June 18th, and publically disclosed on July 7th.

Brian O’Cathain, chief executive of Petroceltic, said that the formal ratification of the agreement “is a critical step in the overall funding plan for this development project”.

“As development operations ramp-up, we look forward to continuing to work with Sonatrach and Enel to deliver the Ain Tsila Project and to maximise the value of this important national resource for Algeria,” he said.

The terms of the agreement with Sonatrach provide for a consideration of up to a maximum amount of $180 million, comprising a $20 million payment on this completion of the transaction; a further $140 million payment of Petroceltic’s share of Ain Tsila project development cost from the effective date of July 4th 2013; and contingent payments of up to $20 million based on the achievement of certain project related milestones.

Petroceltic now has a 38.25 per cent interest in the field and remains operator of the license.

1 Bank leaked my loan request to family who tried to rip me off
2 1,800 homes sign up as WiredScore rolls out build-to-rent certification
3 Ryanair and Aer Lingus monitor impact of coronavirus on travel to Italy
4 Boris Johnson's new immigration regime will damage much more than industry
5 Hotels outside Dublin hardest hit by tourism slowdown
6 Barclays scraps system monitoring how long staff spent at desks
7 Mastercard to create 1,200 new jobs by expanding base in Dublin
8 Best career advisers know plans not built to last
9 Ires hires contractor to build more than 60 apartments close to Croke Park
10 How can I view my dead brother’s will if I’m not the executor?
Real news has value SUBSCRIBE