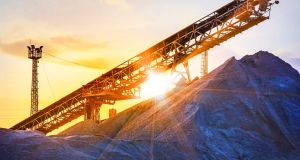 The price of ammonium paratungstate, a white crystalline salt of ammonium and tungsten, has increased 30% since June. Photograph: iStock

Irish-listed exploration firm Ormonde Mining said on Thursday it was ramping up construction at its flagship tungsten project in Spain amid rising prices for the hard metal.

The company, led by managing director Steve Nicol, expects the Barruecopardo Tungsten mine in northwestern Spain to enter production in the third quarter of next year.

“With the very positive decision, taken in early June this year, to advance the project into an accelerated construction and implementation phase, the intervening period has been exceptionally busy at the project,” said Mr Nicol.

Mr Nicol said the rising price of ammonium paratungstate (APT), a white crystalline salt of ammonium and tungsten, has made the decision to accelerate construction of the project “a timely and appropriate one”.

ATP prices have increased 30 per cent since June, and 80 per cent from their January 2016 low.

10 Think that working from home is here to stay? Think again