Conroy shareholder to challenge ruling on board appointments 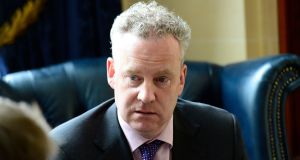 Conroy Gold’s biggest shareholder plans a High Court challenge to the company’s ruling that a vote appointing new directors to its board was invalid.

At an extraordinary general meeting (egm) this month, Conroy’s executive chairman, Prof Richard Conroy, ruled against motions to elect 28 per cent shareholder Patrick O’Sullivan and two others to its board.

Mr O’Sullivan’s lawyers asked the High Court on Thursday to be allowed to challenge the ruling that the three motions appointing him, Gervaise Heddle and Paul Johnson as directors was invalid.

His move came as it emerged that the company was considering replacing a number of the six directors whom shareholders voted to remove from the board at the same general meeting.

Mr O’Sullivan is Conroy’s biggest single shareholder and says he has concerns about corporate governance and directors’ pay.

His lawyer, Neil Buckley, instructed by solicitor Bernard McEvoy, told the court the key issue was the ruling on the validity of the three resolutions.

He confirmed to Mr Justice Paul McDermott that the decision was made after a ballot on the motions and shareholders’ votes were counted.

Prof Conroy ruled against the motions to appoint the three directors on the grounds that they did not comply with the company’s constitution.

However, Mr O’Sullivan maintains that the resolutions did in fact comply with Conroy Gold’s constitution and procedures.

Mr Buckley warned that the issue was “of some urgency” as it was feared that the company was close to making some irreversible decisions.

“There is a proposal to appoint new directors without consulting the ‘would-be’ directors,” he said.

Mr Justice McDermott ruled that the challenge should go ahead and the case is due back before the court on Tuesday.

After Thursday’s court hearing, Prof Conroy indicated that the company was considering replacing them.

“In light of the fact that six directors, including the finance director, had been removed from the board of the company at the recent egm, the company is taking steps to strengthen the board,” he said.

Shareholders argued at this month’s general meeting that the board would need help if it wanted to raise cash to explore gold reserves that it has identified in Ireland and Finland.

Conroy Gold and Natural Resources is best known for it plans to develop gold deposits that it has found near Clontibret in Co Monaghan and Slieve Glah in Co Cavan.

Prof Conroy founded the Dublin-listed exploration company in 1995 to exploit these deposits.

Mr O’Sullivan bought his stake in 2009 and has said that he believes in the company’s prospects.