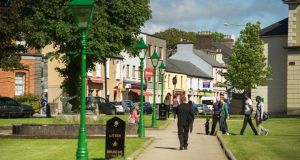 Castlebar, Co Mayo. At a US function this week Opensparkz announced it planned to create up to 250 jobs in the town over three years

Investors seeking the return of up to €1.9 million are threatening to wind up two companies run by the businessman behind a high-profile 250 jobs plan announced this week.

At a function attended by Taoiseach Enda Kenny in Washington DC this week, Dublin-based investor Opensparkz announced it planned to create up to 250 jobs in Castlebar, Co Mayo, over the next three years.

It has emerged that two companies run by Opensparkz chairman and founder Declan Conway are facing the threat of High Court proceedings from shareholders seeking to redeem up to €1.9 million invested in both under a tax-based business expansion scheme (BES).

The shareholders are planning to ask the court to wind up the two companies, Pronanotect and Spearpoint Holdings, if money due to them under the BES is not repaid.

Spearpoint and Pronanotect raised €1.6 million from BES backers in 2009 and 2010. The scheme required them to leave their money in the companies for five years before it could be redeemed.

As this time has elapsed, they argue their money, plus the returns it generated, should be repaid.

Some investors have served formal notices on the two companies demanding that they return the money due within 21 days or face liquidation proceedings in the High Court.

Mr Conway said yesterday that the action involved a minority of people who put money into both companies. “We will be redeeming all BES shareholders,” he said.

He acknowledged that some BES investors were due to be repaid since the end of 2014, but said that the companies had to go through a long process before the shares could be redeemed. “That process has begun,” he added.

He pointed out that the money was raised from BES investors over a period of time, so not all of them are due to be repaid their money at this point. The scheme allowed investors to claim tax rebates against their investment.

The dispute between Mr Conway and some of his BES backers has been running for some time.

A group responsible for €275,000 of the total invested in both companies wrote to him last October demanding to know why €1.6 million had been transferred from the two firms to offshore entities controlled by him, Delaware-registered Avant Capital Partners and Avant Investments LDA in Portugal.