Construction on Co Fermanagh project to start in Autumn 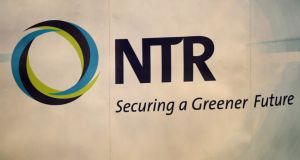 Earlier this month NTR announced net profits that rose 14 per cent to €35.7 million for the year to the end of March

Capital costs for the project, which is expected to enter construction in the autumn, are over £23 million. Costs are to be financed by equity and project finance debt, NTR said.

Commissioning is targeted for the fourth quarter of 2016. Once in operation, Ora More is expected to produce over 42,000 MWhr of green energy per year, enough to support the annual electricity requirements of just under 10,000 homes.

The acquisition marks the first multi-turbine transaction in NTR’s plan to build and operate circa 175MW of wind over the coming two years across the Irish and UK wind markets. The group said it is in the final stages of discussions on a number of other wind schemes and has an additional 65MW of developments under exclusivity together with a further pipeline of over 250MW of projects under review.

“The Ora More wind project is a significant addition to our wind fleet in Northern Ireland, where we also have twelve single turbine projects under construction and in operation. RES has developed an outstanding project and we are very pleased to have the opportunity to acquire Ora More at this point. NTR intends to construct the project and operate it over its lifetime,” said the group’s chief executive Rosheen McGuckian.

Earlier this month NTR announced net profits that rose 14 per cent to €35.7 million for the year to the end of March. Revenues for the period were marginally down at €45.5 million.