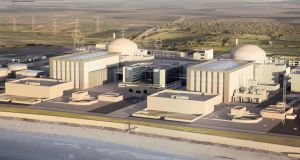 Artist’s impression of the how the proposed Hinkley Point C station: Former Électricité de France money man Thomas Piquemal’s fears over Hinkley Point – that it could threaten the future of the entire EDF group – are now widely shared. Photograph: EDF/PA

The first concrete has yet to be poured in the construction of the £18 billion (€23.2 billion) Hinkley Point C project. But already it is turning into a nuclear disaster for both the British and French governments – and their nation’s taxpayers.

Simmering tensions in the boardroom of the debt-laden French utility Électricité de France (EDF) exploded into the open this week with the resignation of its finance director, Thomas Piquemal. The news sent its shares – already more than halved in the past 12 months – tumbling another 8 per cent.

State-controlled EDF is leading the project to build two reactors at Hinkley Point in Somerset, the first new nuclear plant to be constructed in Britain in a generation. Last year the Chinese were brought on board to help finance the project, and now have a one-third stake.

That still leaves the cash- strapped EDF with two-thirds of Hinkley Point, on which it has already spent around £2 billion (€2.6 billion).

The ambitious project is a key part of the British government’s drive to “keep the country’s lights on”, as well as reducing carbon emissions. Once online in 2025, Hinkley Point is expected to supply 7 per cent of Britain’s electricity needs.

Will it ever get that far? The abrupt departure of Piquemal, the EDF’s money man, was taken by some in the industry as good news for the project, in that one obstacle has now been removed. But Piquemal’s fears over Hinkley Point – that it could threaten the future of the entire EDF group – are now widely shared.

In Britain, questions are increasingly being asked about the over-generous deal the government has struck with the French firm in its eagerness to get the project up and running.

EDF’s finances are dire and getting worse. Its debts have spiralled to €37 billion, its income has crumbled, and the payout to shareholders (already financed by borrowing yet more cash) has been cut. In an effort to save money, it has taken to paying dividends to the French government, which controls an 85 per cent stake, in the form of shares.

EDF plans to sell assets to shore up its balance sheet, something the now former finance director wanted done first, so the future of the company could be secured before yet more cash was poured into the British nuclear project.

Details of the deal the British government has struck with EDF are also pretty embarrassing. Apart from guaranteeing billions in loans for the project, Britain will pay EDF an extraordinary £92.50 (€119.6) per megawatt hour for its energy when Hinkley Point is eventually up and running.

That does at least explain EDF’s apparent reckless pursuit of the project, given its parlous finances.

There are a number of firsts in this project. As well as being Britain’s first new nuclear plant in two decades, it is Britain’s first EPR (European pressurised reactor) plant. The technology is unproven and the omens from other projects around the world are not good.

EPR plants under construction in Finland and France (an EDF-led project) are nine and six years behind schedule, respectively, and both have suffered multibillion-euro cost over-runs. There is no reason to believe Hinkley Point will fare any better.

Martin Young, an analyst at RBC Capital Markets, summed up the views of many, saying that for EDF to proceed with the British nuclear project would be “verging on insanity”.

Unfortunately, governments and companies frequently press ahead with insane decisions rather than face the backlash of admitting they have made a mistake.

A U-turn on Hinkley Point might be embarrassing now, but how much worse will it be several years and billions down the line? And how will Westminster keep the lights on then? Fiona Walsh is business editor of theguardian.com