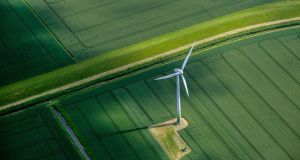 Producing more renewable electricity when the wind blows comes at no additional cost to the producer, and the zero marginal cost of electricity from wind, when it is available, squeezes out more expensive electricity generated from gas or coal. Photograph: Krisztian Bocsi/Bloomberg

We have to make major efforts to phase out our use of fossil fuels such as gas, oil and coal to ensure that we cease contributing to global warming by 2050. This will affect our energy use, with significant implications for our economy and the wider society.

While some of the changes needed in our economy will come at little or no cost, it is clear that many necessary investments will be more expensive. The task of public policy is to ensure that we decarbonise our economy at a sufficient pace and in a manner that minimises the long-term costs of the necessary changes.

For 20 years, subsidies for renewable electricity have been a key instrument of public policy to tackle climate change. In the late 1990s, the government introduced a scheme where suppliers of renewable electricity competed on cost to supply the ESB. This proved effective in ensuring that the cost of the electricity, so provided, was competitive. However, because of uncertainty about planning issues, the scheme did not deliver as much renewable electricity as had been hoped.

A different approach has been in place over the last decade, where suppliers of renewable electricity (mostly onshore wind) are guaranteed a minimum price for that electricity. They also receive a top-up subsidy when the price is above the minimum.

As the main cost of generating electricity from wind is the cost of installing wind turbines, it is a very capital-intensive business. So this type of support is valuable in reducing uncertainty and thereby lowering the cost of raising capital.

Support for peat-fired electricity is damaging to the climate and costly to consumers. It should be halted as soon as possible

Support for peat-fired electricity is damaging to the climate and costly to consumers. It should be halted as soon as possible. We need to find ways to support employment in the midlands that are not damaging to the environment.

Research by di Cosmo and Malaguzzi Valeri* found that, over the period to 2012, the impact of the cost of the subsidy on consumers’ electricity bills was more than offset by the reduction in electricity prices. Over this period, the reduction in emissions of greenhouse gases from electricity production due to the increase in electricity from renewables actually made us better off – a win-win situation. These calculations took account of the fact that, because of its volatility, more expensive generation using gas or coal may be needed in the lulls when the wind does not blow.

For the future, we need to decarbonise all of our electricity production. Using existing technology to do this would be very expensive. We would need to provide storage, such as batteries, to deal with fluctuating sources such as wind or solar power. We would need to capture the carbon dioxide from burning any fossil fuels, and bury it.

However, the experience of the last 15 years shows that new and more cost-effective technologies develop rapidly in response to the changing policy and economic environment. A world that has signed up to the Paris climate accord creates a strong market for renewable energy solutions. Even in the US, where President Donald Trump is pondering reneging on the accord, a strong momentum towards greener energy is already under way.