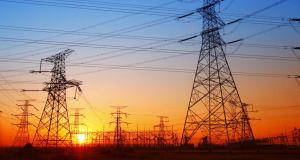 While a major and prolonged interruption to energy, especially electricity, may be highly unlikely, it is a key task of government and of the regulatory authorities to ensure this never happens

In the second World War Ireland faced a severe shortage of energy as the UK prioritised its own energy needs. As a result, Irish Shipping was established to independently source supplies abroad, including energy. Ireland also increased its reliance on our domestically-produced fuel, turf.

However, the conversion of trains to run on peat resulted in a massive deterioration in performance. The energy shortage caused major hardship to households, as well as major disruption to the economy.

Ireland’s wartime economy needed much less energy than we do today. Ireland is now far more reliant on secure and reliable energy supplies, especially of electricity, than it was 70 years ago.

While key institutions and businesses, such as hospitals, have emergency generators which would help them survive temporary interruptions, nearly all households would be dramatically affected by any prolonged interruption to electricity supplies. For example, central heating systems and our urban water supply rely on electricity to operate their pumps.

Research has shown that households would suffer huge costs from a prolonged interruption to electricity. Business would also cease to function properly.

Without power, our supermarket fridges would fail and the secure supply of food, which we now rely on, would be dramatically interrupted.

A feature of our gas supply is that, in 2000, nearly all of it came through a single pipeline from Scotland. There was a very small chance that the pipeline could be damaged, maybe in a once-in-100-years event. But, while an interruption was very unlikely, it would have been irresponsible of government to have ignored the possibility. As a result, a decade ago a major investment was made, adding a second undersea pipeline from Scotland. Unfortunately, onshore in Scotland, we are still dependent on a single pipeline for all our gas.

At the level of the EU, there is an agreement that in the event of a serious gas shortage, supplies will be shared. This provides reassurance against a possible Europe-wide supply shortage.

However, UK exit from the EU, were it to happen, would raise concerns about the enforceability of this agreement in respect of gas supplies from the UK.

Bringing Corrib gas onshore would provide a second, independent source of supply, thus enhancing security of access to the gas we need to generate electricity.

Corrib gas was originally promised for 2002 but, as a result of multiple mistakes by the energy giant developing the Corrib field, and by the regulatory authorities (with local protests contributing to the delay), the gas has still not flowed.

Thus, for over a decade we have been at risk, albeit very small, of a catastrophic loss of gas supply.

The failure to deliver the second North-South electricity interconnector poses another major danger to energy security on this island. This failure puts at risk the security of electricity supplies across all of Northern Ireland. The absence of the interconnector is also costing the people of Ireland tens of millions of euro every year.

In the last decade, Northern Ireland and the Republic agreed to form an integrated electricity market on this island to deliver significant cost savings for all consumers and to enhance energy security. With the exception of the interconnector, the objectives of this programme have been largely delivered and the electricity systems in both jurisdictions have been successfully integrated. This is probably the most successful of all North-South co-operation projects.

Anticipating the promised delivery of the second interconnector, new electricity generation has been installed in the Republic on the understanding that it will also serve the North.

Having suffered many delays, the proposal for the interconnector is back in the planning system. It is very urgent that it is brought to a successful conclusion and that work then begins on delivering the interconnector. While there is local opposition to its construction, the potential damage to the people of Northern Ireland through a failure to deliver far outweighs the likely local costs. The correct approach is to push ahead with the project and to compensate suitably those who are damaged by its delivery.

The fact that we have not suffered any major interruption to energy supplies since the Suez crisis of 1956 may lull us into a false sense of security. However, government must remain vigilant, even against low-probability risks to energy security, because of the high economic and personal costs of any failure of supply.