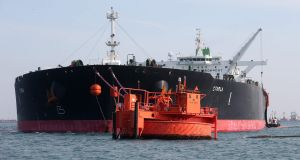 Iran Heavy, one of the country’s main export grades, will cost $1.25 a barrel less than Saudi Arabia’s most similar crude in March. Above: the Starla, an Iranian crude oil tanker in, South Korean waters. Photograph: YONHAP/EPA

Iran has revealed its oil prices to European buyers for the first time since sanctions were lifted against the Middle Eastern country.

The most competitive pricing compared with Saudi Arabian supply in 21 months underscores its intention to win back market share.

Iran Heavy, one of the country’s main export grades, will cost $1.25 a barrel less than Saudi Arabia’s most similar crude in March, notices from both nations’ state oil companies show.

The Persian Gulf country supplied Turkey during the sanctions and continued to publish prices for Europe throughout the measures. Its most recent discount will be the deepest against the Saudi grade since June 2014.

In Asia, having tracked Saudi prices since at least 2006, Iran is also giving deeper discounts for the grade. The fifth- largest producer in the Organisation of Petroleum Exporting Countries (Opec) has said it will boost production and exports by one million barrels a day this year and plans to introduce a new heavy grade.

“Iran is going to have to price aggressively until they can get themselves established once again in the market,” Robin Mills, chief executive officer of Qamar Energy, said . “They’re trying to add a lot of supply to the market in a short time.”

Iran’s oil exports fell to an average of 1.4 million barrels a day in 2014 from 2.6 million barrels daily in 2011, the year before the US and EU intensified sanctions, the US Energy Information Administration said in June.

“Everyone is interested in Iranian barrels, as long as the price is reasonable,” Ehsan Ul-Haq, senior oil market consultant at KBC Energy Economics said, adding that its discounts were deeper than were necessary to be competitive.

“When you start exporting to a certain region, you have to provide some certain introductory discount,” he said, referring to the European pricing decision. – (Bloomberg)

1 In this strangest of recessions, what happens next for Ireland?
2 Bank of Ireland sees about 2,000 staff apply for voluntary redundancy
3 Estée Lauder staff at Dublin airport plan further strike action
4 Michael O’Leary is the boss you want to lead an airline out of crisis
5 Fortnite owner signs multimillion deal to buy Irish ‘kidtech’ firm
6 Best Covid-19 ‘influencers’ will avoid hectoring
7 Will brother’s widow get half of our parents’ estate when they die?
8 Overhaul of lease arbitration regime would be a game changer for retailers
9 Should I switch bank now with Ulster Bank at risk of closing?
10 Coronavirus response must not kill the futures of Ireland’s young
Real news has value SUBSCRIBE