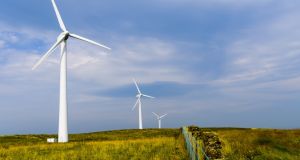 Energia has an existing supply of 1,200 MW including power from 22 owned and invested wind farms across Ireland. It also operates two major gas-fired power stations in Dublin. Photograph: iStock

Utilities provider Energia intends to invest more than €3 billion in renewable infrastructure over the coming five years, the company said on Monday.

The investment will fund an increase in the company’s capacity, adding as much as 1,500 mega watts (MW) of renewable energy generation to the grid.

The company has an existing supply of 1,200 MW including power from 22 owned and invested wind farms across Ireland. It also operates two major gas-fired power stations in Dublin.

Energia, which is ultimately owned by US investor I Squared Capital, said its infrastructure investment will create an additional 200 jobs at the group, bringing its total to 1,000. There will also be an estimated 3,000 to 5,000 construction workers involved in the five-year programme.

Some of the projects it plans to focus on include onshore and offshore wind farms, solar power, hydrogen fuel generation and bio-energy facilities.

“Under the Government’s Climate Action Plan, we want to increase the amount of energy produced from renewable sources from the 30 per cent we produce today to 70 per cent by 2030,” Taoiseach Leo Varadkar said, welcoming the announcement.

“To do this, we need industry to step up to the mark. I commend Energia group for announcing this €3 billion investment in a range of renewable energy projects, from wind farms to bio-energy, which will help us to reduce greenhouse gas emissions, give us cleaner air and reduce the need for expensive fossil fuel imports,” he added.

Ian Thom, Energia’s chief executive, noted that the company has invested more than €1 billion in Irish infrastructure to date – including a recent announcement that it will process a minimum of 70,000 tonnes of organic waste annually from Panda at its north Dublin bioenergy plant.

Panda began supplying organic waste last month, which will come from its black and brown bin collection services across greater Dublin. The deal is expected to be worth up to €50 million to Energia.

Energia Group, Energia’s immediate parent company which was formerly known as Viridian and also owns Power NI in the North, services about 750,000 customers on the island of Ireland. Energia supplies about 25 per cent of Ireland’s total energy and 21 per cent of the island’s total wind power.

Energia also agreed a €44 million debt finance package with AIB in May for its bioenergy plant in north Dublin. That plant will be operational by the end of this year and have enough capacity to power about 8,600 homes.