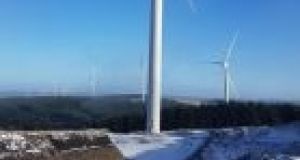 Greencoat Renewables on Monday said the company has a stable business model.

“The company has matured significantly in the three plus years since listing. We are much larger and more diversified and are benefiting from increasing economies of scale. We also have a considerable opportunity ahead of us as we bring our expertise and experience to the deep pool of renewable assets in Europe,” he said.

The company increased its portfolio to 21 wind farm investments during the year, increasing net generating capacity to 557MW and GAV (gross asset value) to € 1,177 million as of year-end. Deals during the year included the acquisition of four wind farms in Ireland, as well as the group’s first transaction in continental Europe with the acquisition of three wind farms in France. So far in 2021, Greencoat has announced it is to acquire the Kokkoneva wind farm in Finland once it becomes operational in 2022, and the Cordal wind farm in Ireland, which is expected to close in April 2021.

Greencoat declared total dividends of 6.06 cent per share, and confirmed its target 2021 dividend will remain at 6.06 cent.