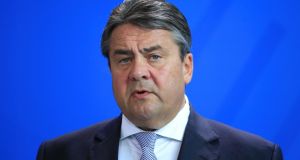 Sigmar Gabriel, Germany’s economy and energy minister: “We’re sending an international signal to show we are achieving the switch to renewables in a highly industrialised country and are setting European and international standards.” Photograph: Krisztian Bocsi/Bloomberg

After months of squabbling, Berlin’s ruling coalition has struck a compromise it says will square the circle on how to abandon nuclear energy without breaching German climate targets.

Berlin has said it will push ahead with closure of brown- coal or lignite-fired plants producing energy of 2.7 gigawatts – the equivalent of five power stations – but without imposing a planned industry levy to cover the cost.

Economics minister Sigmar Gabriel said the deal would safeguard Germany’s 2020 carbon-reduction targets, to reduce 1990 CO2 levels by 40 per cent, but environmental groups said the deal was a bonanza to Germany’s energy giants.

Shares in the RWE energy utility jumped nearly 6 per cent on the news that a planned mothballing levy had been dropped. In addition, energy companies will be allowed keep the closed plants as part of a “capacity reserve”, to be activated in case of energy shortages.

“We’re sending an international signal to show we are achieving the switch to renewables in a highly industrialised country and are setting European and international standards,” said Mr Gabriel, the SPD leader and deputy chancellor.

The aim of the plan remains, to cut 22 million tonnes of CO2 emissions. Under the revised plan half the savings will come through mothballing coal-burning stations and the rest through additional measures for greater energy efficiency and for alternative power and heat co-generation.

Subsidies worth €1.16 billion will on offer to support energy efficiency projects, while industry can tap a €1.5 billion fund to boost production at gas-burning plants.

In Berlin, the opposition Green Party criticised the deal for transforming a planned industry levy for carbon production into a reward programme. It said the deal was an “expensive and dirty” sell-out, shifting on to taxpayers the cost of a deal it said would eventually fall short of meeting Germany’s climate change obligations.