Fuel for thought: Ireland is 14th dearest country for petrol 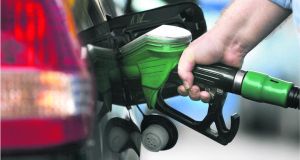 Ireland is the 14th most expensive country in the world for petrol, according to data compiled by Bloomberg. (Photograph: Dara Mac Dónaill / THE IRISH TIMES)

And despite rapidly falling oil prices - a barrel fell to €57 Tuesday morning - the cost of petrol at the pump is unlikely to fall significantly between now and Christmas, given that so much of the cost of fuel here is tax.

According to the research, a litre of petrol costs on average €1.48 in Ireland. This puts the country behind its close neighbour the UK, which is ranked in 8th position, with average petrol prices of €1.55/litre.

However, in terms of “pain at the pump” - ie the proportion of income needed to fill a car with petrol - Ireland fares better. It is ranked 47th out of 65 countries, given that it takes 5 per cent of an average day’s wages (€112) to buy a gallon of gas.

It may have its own oil reserves, but Norway is nonetheless the world’s most expensive country for petrol, as rather than subsidising the cost of fuel at the pumps, it uses its oil profits for national services such as health and education. It costs €1.96 for a litre of petrol, but with the world’s second highest incomes, its inhabitants can easily absorb the cost.

At the other end of the scale is Venezuela, the cheapest country in the world for petrol, according to Bloomberg, where almost free petrol is considered a “birthright”. A litre of petrol costs just €0.01, meaning that the cost of filling up the 39-gallon tank of a Chevrolet Suburban in Venezuela is $1.56, compared with $114 in the US and $361 in Norway.

The oil rich Middle East is also extremely competitive. A litre of petrol in UAE for example costs just €0.38, but in nearby Kuwait the cost drops to €0.17, and plummets to just €0.10 in Saudi Arabia, OPEC’s biggest oil producer.