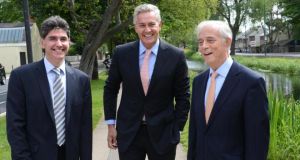 The absence of mobile hydrocarbons in the Dunquin North well may have been negatively received by the stock market but all is not lost, according to Providence Resources chief executive Tony O’Reilly (pictured).

Yes, Providence may have fallen the most in over a year in Dublin trading as it sketched out plans to abandon the Dunquin North exploration well earlier this summer, plunging 10 per cent on the Irish Stock Exchange and as much as 11 per cent in London trading.

However, O’Reilly yesterday said the company believed the evidence for oil generation and entrapment in the southern Porcupine Basin may well provide much greater sustainable value for shareholders in the longer term.

“It is also important to remember that this well, being the first in the basin, was always a high-risk exploratory venture.

The fact that we were able to confirm the presence of a new working petroleum system is very encouraging and which has, without doubt, caught the attention of the international E&P sector,” he said.

Providence clearly hasn’t given up.

That said, the exploration company has an interest in maintaining an international focus on the area that had been termed the North Atlantic source rock superhighway.

After all, it said it was the “largest acreage holder in the southern Porcupine Basin”.

The company said yesterday an
application had been made to extend the second phase of the Dunquin frontier exploration licence by 12 months to next November.