Bord na Mona may get caught in storm over windfarms 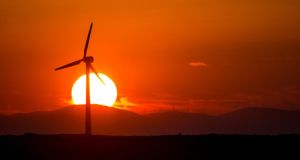 Just as chairman John Horgan began speaking last Monday at the official launch of Bord na Mona’s new €115 million Mount Lucas windfarm, a gale whipped up around the marquee housing the assorted dignitaries who had gathered on a bog in the middle of Co Offaly.

If it keeps blowing like that, BnM’s largest-ever investment could pay off in record time.

State-owned BnM is a company in transition. Founded to harvest turf, its peat division now accounts for less than half its €427 million sales. Although still substantial, peat harvesting is in reality a relic of BnM’s past. Its future, according to Horgan, is renewable energy.

“[Mount Lucas] is a foretaste of the kinds of projects we are going to do going forward,” he said. “The board will in coming months carry out a major rethink of strategy. We want to play a major role in Ireland’s energy solution.”

But with plans to develop a new major windfarm every year for the next seven years, is BnM stepping into the middle of a storm?

Windmills are the Marmite of the energy industry, dividing swathes of people into lovers or haters.

The Irish Wind Energy Association, a lobby group for what has become known as “big wind”, maintains that windfarm investment could inject €2.6 billion into the economy over the next six years, as Ireland aims to produce 40 per cent of its electricity using renewable methods as part of 2020 European targets.

Creating jobs while saving the planet is an alluring proposition.

Opponents come in two camps. Firstly, there are the environmental and planning critics, often local groups, who argue that windfarms are noisy and a blight on the landscape. About 30 such noisy protestors confronted the car of Minister for Energy Alex White at the gates to Mount Lucas.

Other windfarm critics have mostly economic gripes. Colm McCarthy, the UCD and “Bord Snip” economist, is the most vocal of this group.

Windfarms are heavily subsidised, gobbling up a third of the levies attached to every electricity bill. McCarthy has said that many of the windfarms now being developed are not needed, and advocates energy reduction instead of more capacity. There will be “a Nama for windmills” in future, he says.

Stung by the groundswell of opposition that is beginning to frame the debate, plans a major public relations push this year aimed at resetting the discussion.

Minister White declared that the Government’s upcoming White Paper on energy would address how to implement international best practice on community consultation regarding windfarm development.

“Energy policy is the property of the people of Ireland. I will not assume their agreement,” White warned the renewable energy industry.

Into this maelstrom steps Bord na Mona, joining its semi-State brethren – Bord Gáis, ESB and Coillte – with which it is meant to co-operate. All see a big part of their futures in green energy.

BnM first invested in wind in 1992, but only in recent years has it put big money into the sector, as technology and scale bring the onshore wind industry to the cusp of standalone viability.

As well as Mount Lucas, BnM also has windfarm investments at Bruckana in Offaly and Bellacorick in Mayo. It is planning a huge windfarm for 2017 at Oweninny in Mayo, in conjunction with ESB.

The company also has renewable energy interests via its Edenderry biomass plant and a landfill gas facility at its Drehid superdump. It is also exploring developing solar plants on its midlands bogs.

“This is a seismic change for BnM,” said its managing director, Mike Quinn. “Mount Lucas is the first of a concrete series of measures [towards renewable energy].”

Apple’s announcement last month that it will invest €850 million in a windmill-powered data centre in Galway is a clue to why BnM is entering the sector.

Ireland will also need hundreds of new windfarms to hit its 2020 emissions targets. With a major expansion of the beef and dairy industries in train – cows’ backsides produce a lot of emissions that must be offset – the case for investment must be compelling.

However, if there is one thing to be learned from the recent palavers over Irish Water and electricity pylons – not to mention the morass that has swamped Shell over its Corrib gas plant – it is that infrastructure investment in Ireland, particularly in energy, can be a high-stakes game.